T-Mobile may be preparing for the launch of Samsung’s Galaxy Tab 2 10.1 Android tablet on its HSPA+ 42 Mbps network in the U.S., which the carrier is actively promoting as 4G. The device was recently spotted at the FCC for regulatory approval, and given that it shows compatibility with T-Mobile’s network, it is possible that T-Mobile is looking to launch this tablet in the near future. In addition to the Galaxy Tab 2 10.1, T-Mobile has actively supported Samsung’s tablet efforts in the past.

The device has a model number of SGH-T779. The rear of the tablet has T-Mobile’s branding from a diagram submitted to the FCC along with a 4G logo. 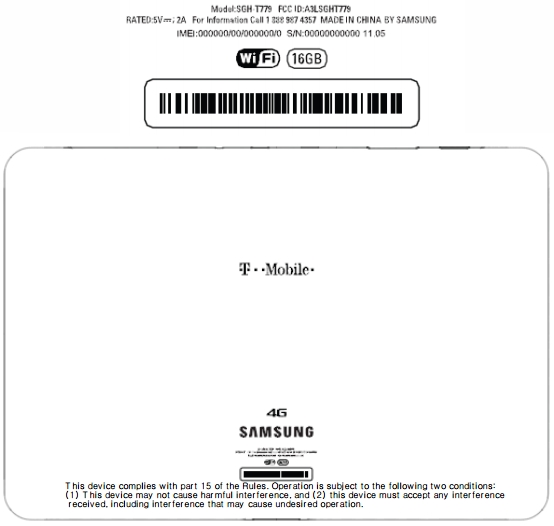 Rival carrier AT&T may also be evaluating the Galaxy Tab 2 10.1 on its network. According to Unwired View, a Galaxy Tab 2 10.1 with the model SGH-I497 that’s compatible with AT&T’s network was seen at the FCC previously. Regulatory approval by the FCC still does not guarantee that a carrier will follow through with its launch plans. Carriers often times cancel products at the last minute. It’s unclear when or if AT&T and T-Mobile will decide to launch the Galaxy Tab 2 10.1 for their networks.

The Galaxy Tab 2 10.1 is similar to the original Galaxy Tab, but the new model also accommodates a memory card so users can add storage. The tablet was originally announced with options for 16 GB or 32 GB of built-in storage. It’s unclear if carriers will offer both models or a single model in their lineups.