T-Mobile Responds To AT&T With Its Own Ads

A new set of full-page ads from T-Mobile respond to AT&T’s full page ad attacking the carrier earlier this week.

According to TmoNews, T-Mobile has three new ads that attack AT&T and its recent full-page ad. The first T-Mobile ad questions the logic of AT&T attacking the carrier it once tried to buy. That ad asks “ff AT&T though out network wasn’t great, why did they try to buy it?” 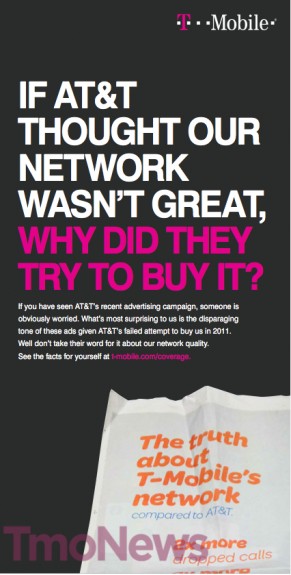 Another T-Mobile ad asks if anyone can “see the beads of sweat” from AT&T. The ad claims that T-Mobile is “turning up the heat,” and that AT&T is worried. Thus, the ad claims, AT&T is reduced to taking “cheap shots” at the T-Mobile network.

The third ad uses similar language to the second, but says that T-Mobile apparently keeps AT&T up at night.

This year T-Mobile will do away with phone contracts in favor of what it calls “Value Plans.” Those plans are cheaper than plans from AT&T and Verizon. Value Plans give users the option of either paying the full price of a phone, or paying off the phone over a period of 20 months. Either way, the user is not tied to a two-year contract.

T-Mobile will also rollout its 4G LTE network in the near future, starting first in Las Vegas. By the end of 2013, the carrier expects to offer 4G LTE to 200 million Americans. Only two phones, the Galaxy S3 and Galaxy Note 2, will support the network at first. But more will come, including the next iPhone, later this year.