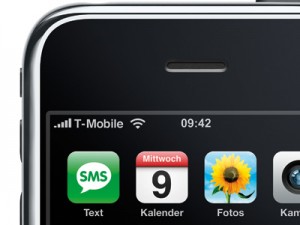 Even though AT&T had announced that it would acquire T-Mobile for a hefty sum of money, T-Mobile USA states that customers should not expect an iPhone on the network in the near term.

“T-Mobile USA remains an independent company,” stresses the carrier while steering customers and potential customers to other devices, like the Samsung Galaxy S 4G and the Samsung-made Sidekick 4G as the AT&T deal is not expected to close for approximately 12 months.

Even if the Apple iPhone did make its way to T-Mobile, Apple would either have to adopt a penta-band model, like the Nokia N8 to support 5 bands for 3G use on T-Mobile’s AWS network, or Apple would have to make a separate AWS-compatible iPhone just for T-Mobile. Prior rumors suggested that T-Mobile would have received an iPhone 5 that’s a one-off design until the acquisition is complete according to Electronista.

Though the deal with AT&T will give T-Mobile a path to 4G LTE–the carrier currently uses HSPA+ as a 4G protocol–T-Mobile was caught off guard by the AT&T offer. The carrier was previously rumored to be in close talks with Sprint to merge the two networks together. According to TechCrunch, Sprint was desperate to buy T-Mobile and the combined assets of Sprint and T-Mobile would make Sprint even more competitive with AT&T and Verizon:

A Sprint/T-Mobile merger would have given them around 85 million customers. That would have put them only 10 million or so behind AT&T. Obviously, regulators would have looked more favorably at that maneuver, since it would mean a more level playing field.