A new leaked screenshot of T-Mobile USA’s system reveals that the nation’s fourth largest carrier will be getting some new devices. In addition to offering the Galaxy S Blaze 4G, which may be an upper mid-range device with fast 4G HSPA+ network support, T-Mobile is looking to add the HTC Ville and Huawei Prism smartphones to its network.

Right now, it’s unclear what the Huawei Prism may be. T-Mobile USA and Huawei are developing a new, but strong relationship in the U.S. Huawei had created the MediaPad for T-Mobile, and that 7-inch Android 3.2 Honeycomb tablet was rebranded as the T-Mobile Springboard for the carrier. The Prism may, again, be a rebadged version of a new or existing Huawei smartphone for T-Mobile’s AWS 4G HSPA+ network. One potential could be the Huawei Ascend P1 S smartphone, a super slim that out-thins the Droid RAZR that was announced at CES. When the phone was announced last month, Huawei did not identify any carrier partners for the Ascend P1 S, but it was later revealed that the phone will be landing in China first. Another possibility is the Huawei D1 Q, a rumored quad-core handset. 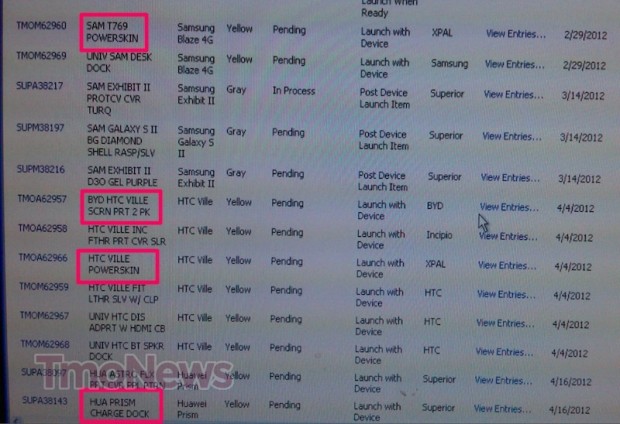 The other smartphone is the HTC Ville, which has been rumored in the past to land on T-Mobile’s network so it comes as little surprise that the device is now appearing on the carrier’s computer system. The HTC Ville has been leaked and rumored numerous times before, and one speculation has it that the device will come with a curved glass screen similar to Samsung’s Galaxy Nexus and Nexus S smartphones. The phone is said to sport a super slim unibody construction and come with Beats Audio integration. The screen, however, won’t be a 720p HD display, but will rather utilize a qHD resolution. The HTC Ville may debut with Samsung’s next-generation powerful Krait S4 processor and will come with Android 4.0 Ice Cream Sandwich.

It’s unclear when these devices will launch and at what price points. The dates in T-Mobile’s inventory system are for the accompanying accessories for these devices, which should be available in early April.