For those of you out there with a Samsung Galaxy S II or HTC Amaze on T-Mobile wondering about when Wi-Fi calling might be enabled, we have some, well, lukewarm news to share with you. November 13th, which was the rumored release date for the feature, has come and gone but the carrier still hopes to issue the feature to device owners at some point in the near future.

Apparently, that November 13th date was “incorrectly communicated,” according to a report from TMoNews. T-Mobile says that the feature is still a top priority so we expect it to arrive sooner rather than later.

Wi-Fi Calling is exactly what it sounds like. The feature enables device owners to make calls over a Wi-Fi network. However, not every T-Mobile phone has it. Only certain phones are compatible. 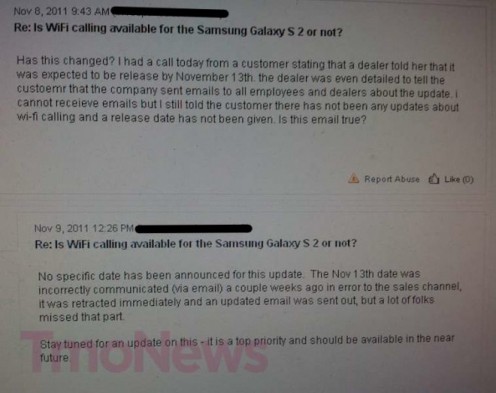 The Galaxy S II and HTC Amaze are T-Mobile’s HSPA+ 42Mbps devices and they will only become better once this feature is enabled.