If you’re a T-Mobile U.S. customer, your need for speed may soon be fulfilled as the nation’s fourth largest carrier is now testing a new 10 X 10 network that will deliver in faster LTE speeds than what is currently available on any carrier in the country. In the highly populated area of New York City, outspoken CEO John Legere has been posting speed tests to Twitter where T-Mobile’s 4G LTE network was able to deliver extremely low latency–good for multiplayer gaming and video chats–as well as speeds up to 60 Mbps on the download side.

The 10 X 10 deployment would allow T-Mobile to add customers without adding congestion to its network. Currently, T-Mobile operates most of its LTE markets in a 2 X 5 MHz deployment, which could quickly lead to degraded speed performance when the carrier adds more subscribers, but moving to a more robust 10 X 10 Mhz structure will free up more bandwidth. 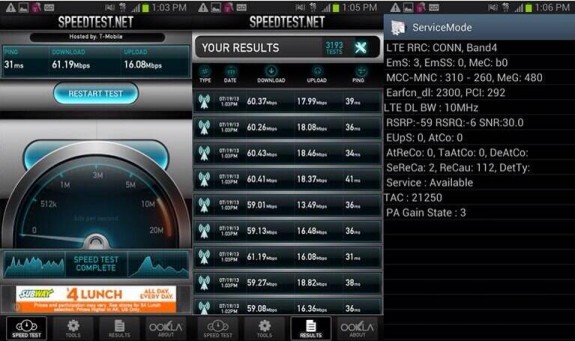 In New York right now, T-Mobile is bumping down its HSPA+ network, also classified as a 4G protocol, from 42 Mbps to 21 Mbps. The freed up resources were added to the LTE portion of the network for this test. After tests are complete, T-Mobile will be firing up all cylinders and running HSPA+ at 42 Mbps and operate a faster LTE network concurrently.

It’s unclear if Legere’s NYC speed of around 60 Mbps will hold up in real world usage. Both Verizon Wireless and AT&T Mobility both promise speeds between 5-15 Mbps, but in San Jose, California both networks deliver faster real word performance where Verizon would clock in consistently between 15-20 Mbps and AT&T would come in between 20 and 30 Mbos. About 50 miles north in San Francisco, California, Verizon’s network is a different story, often buckling under heavier stress as its network has been live longer than AT&T’s and has attracted more adopters. It should be noted that AT&T is heavily promoting that its LTE network is the fastest in the nation, citing independent tests.

Low latency and fast speeds would benefit customers in a huge way, even if you don’t play multiplayer games or video chats often. Loading webpages would be fast and quick, and users who watch a lot of streaming Netflix or YouTube videos would be able to click play and have very little, if any, buffering at the beginning.

In addition to T-Mobile U.S., AT&T Mobility, and Verizon Wireless, Sprint is also building out its LTE network. The carrier is trying to aggregate all of its various spectrum holdings together and more phones and devices that can operate on all three of Sprint’s LTE spectrum bands should be coming in 2014. This would allow Sprint to have more flexibility to deliver connectivity on the best bands no matter where its subscribers are, whether that’s indoors or out, or near a cell tower or underground in a tunnel.

This could be great news for customers who are interested in fast speeds and unlimited smartphone plans. T-Mobile and Sprint are two of the big four carriers that still offer unlimited in this age. It’s also great for customers who are eyeing Google’s new Nexus 7 tablet that was refreshed this year adding an LTE chip that’s compatible with AT&T’s, Verizon’s, and T-Mobile’s network.