T-Mobile USA, the lone carrier of the big four national carriers in the States to not offer an iPhone, is listing the all recent iPhone models as having a ‘poor experience’ on its 4G HSPA+ network. At a cursory glance, that makes sense as Apple’s GSM iPhone models aren’t compatible with T-Mobile USA’s 3G or 4G networks, and instead iPhone users looking to port to T-Mobile would have to do with a slower EDGE 2G connection. Despite those facts, T-Mobile had in the past boasted that it had activated over 1 million iPhones on its network despite not officially supporting the iPhone on its network. 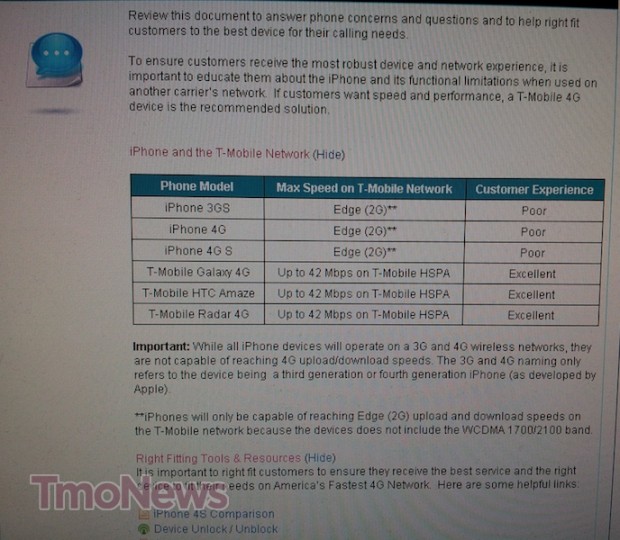 However, T-Mobile may have hidden motives on steering customers to devices that it supports on its network, such as the number of HTC- and Samsung-made smartphones that are capable of 4G HSPA+ speeds. For one, those phones will be easier to support should a customer call in with questions, complaints, or any other inquiries. T-Mobile customer support staff are all trained and knowledgable on those devices, versus trying to blindly troubleshooting an iPhone as a device that it doesn’t even carry.

Secondly, T-Mobile, which had suffered declining subscriber numbers, may want to entice customers to cheaper, subsidize 4G Android smartphones in the hopes of moving sales and also locking those new customers to a two-year service agreement.

Whatever the case is, T-Mobile is definitely equating a poor customer experience with 2G EDGE speeds, which seems like a reasonable assertion. But for the 1 million iPhone users on T-Mobile’s U.S. network, those customers are probably aware of the sacrifice in data speeds that they would have to give up when they want T-Mobile as their network of choice.