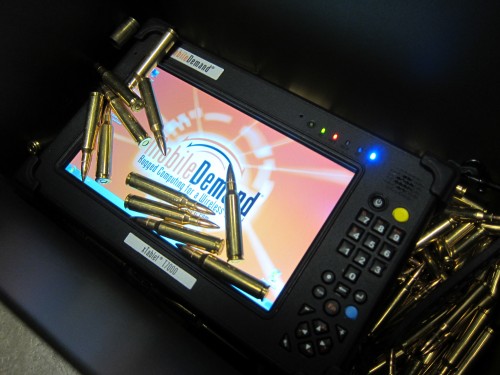 Just to get this out of the way, we did NOT shoot the device as it’s probably not covered under warranty. We did bang it around quite a bit and I talked to my brother about how gun owners and police officers might be able to use such a device.

My brother is a police officer and an expert shooter. He’s served on special task forces that kick in doors and break through windows to arrest drug dealers and other felons. A bad day at work for me means one of my sites go down or someone doesn’t like my pictures. A regular day for him is putting his life on the line while dealing with the lowest of the low.

My camera shooting skills are orders of magnitude better than my handgun shooting skills, so my brother offered to give me some pointers. Rather than try to remember what he told me, I used the T7000 to ink the pointers he offered. I also used the numeric keypad to tabulate and save my scores on one of the targets (it wasn’t pretty).

GBM InkShows are sponsored by MobileDemand, a company that builds Rugged Tablet PCs

It sure is difficult to speak when you can’t hear yourself due to ear muffs and gunfire. It’s probably even more difficult to understand what the heck I’m saying, so I sub-titled the video for your convenience.

As you can see in this video, we kept the xTablet T7000 up on the bench while shooting. The display held up just fine to magazines being thrown on it and red-hot brass ammo casings falling on it.

Instead of putting the xTablet T7000 in a soft case like I do with my other PCs, I threw it in my ammo can. I tried dropping a bunch of M16 ammo on it from chest level to see if the display would get damaged at all. There wasn’t a mark on the screen.

The shooting range is one place that you rarely see PCs. Obviously, my shooting skills aren’t up to a point where deep analysis matters. But using a device like the xTablet T7000 could help police departments fine-tune cadets’ and officers’ shooting skills. Officers must qualify on each weapon they use at various distances.

The closer to the center of the target the more points you earn. The problem is that you earn the same number of points regardless if you miss high, low, left or right. With a Tablet PC like the T700 an instructor could take things to a new level by taking photos of each completed target, annotating them with his observations and emailing them to the pupil. He could even shoot videos to show the shooter what he’s doing wrong.

Like other rugged tablets, the xTablet T7000 isn’t cheap, but it might be the right tool for the job if you don’t sit behind a desk all day. This model starts at $1,995. I shot a walk-through video of the xTablet T700 last fall with a pre-production unit that I wasn’t allowed to kick around. You can see that video here and get the full specs of the xTablet T7000 from MobileDemand .