Blogging this morning from the road on a Tablet.

I’m on the road between Virginia and Florida this morning and I noticed a post in my feeds from re/code, the new platform of Walt Mossberg and Kara Swisher, formerly of All Things D, a Wall St. Journal property. The post is titled Our Love Affair with the Tablet is Over and it is by Zal Bilimoria, a Partner with Andreessen Horowitz. The simple premise of the post is that Tablets have lost their mojo and soon we’ll all be sporting phablets. That’s an easy point to argue and I can’t say that I disagree entirely with the points Bilimoria is making. To agree with him entirely I’d have to accept a world where there is a one size fits all device that is perfect for everyone to the exclusion of all others. To take that position I’d have to be delusional or just trolling for link bait. 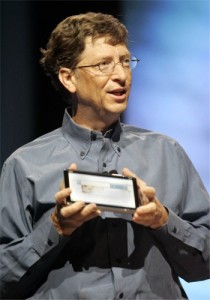 We’re actually entering into a very fascinating time for consumers who like to use non-traditional PCs to get their data and content at work, play, or on the go. Phablets are just another size of Tablets and to even the non-experienced eye, the success of that form factor is no surprise. There are many who desire the vision that Bill Gates laid out with the phablet sized Origami Tablet years ago. But there are also many who prefer larger Tablet screens and screen sizes in between.

You see that’s the beauty of the thing that those who want to pick a winning form factor miss time and time again. Unlike desktop computers that bound us to desks, and then laptops that helped move us to easy chairs, Tablets offer us possibilities with form factors that fit who we are and how we like to do things instead of giving us another tool that forces us to conform to a limited range of addressing them.

Bilimoria makes another point that it is all about the phone. By that he means always on connectivity in a smaller form factor. He cites his experience with Netflix, that I assume is backed up by some data that isn’t cited. According to Bilimoria users prefer to view that Netflix content on the phone rather than a Tablet.  Mysteriously he says that Tablet usage rose than fell off. I can’t question those non-statistics. I would say there is some logic to it, but I wouldn’t use that as a data point to say that a love affair with Tablets is over anymore than I would say that the bloom is off of any romance the first morning that one partner doesn’t bring another coffee in bed.

Bilimoria says “Tablets are trying (and failing) to be portable enough to go everywhere, yet large enough to be multipurpose” and that’s where I would begin to disagree. The marketeers and bean counters may be looking for the miracle device that everyone wants to own, but the reality is humans (not data points) are looking at an engaging array of choices that may fit their needs and desires. Will there be more of one type than another? Sure. Will it matter? It shouldn’t. There is no single winning form factor when it comes to Tablets and phablets. Smaller will be better for some. Always on will be better for some. But others will make other choices. We’re about to see the rumored “pro” Tablets come out this year. Folks like Bilimoria will, I’m sure, declare them failures because they won’t sell in numbers that the original iPads did on launch. The point they miss is that a family of devices that defies the conformity that most of the tech industry was (and still is) based on is branching out in ways that make consumer choice potentially a more powerful driving force than it has been in the past.

The love affair isn’t over. Consumers are just in a dating phase sleeping around with new options as they look for the best match. Put another way, it would be like saying no one wants to read Mossberg and Swisher unless they were under the Wall St. Journal brand.