There was a lot of negative talk last year about Tablet PC features being morphed into Vista. A lot of folks worried that Tablet PC marketing and features would get pushed under the rug as a result, and we would never hear about tablet again. I’ve always been of the opinion that Tablet PC being a standard feature of Vista is a huge plus for the platform. There is tremendous value in having the tablet bits as a standard feature in Vista, especially as it relates to sharing documents created in ink with other non-Tablet PC users. This is a very important thing for businesses to keep in mind.

As an example, I’m in the beginning stages of prepping for an InkShow on Active Ink, a forms design tool for creating ink-enabled forms. I wanted to see if a non-Tablet PC could recognize the ink on a form that was created on a Tablet PC. So, I copied an ink form created on a Tablet PC over to the Vista based non-Tablet PC. I opened up the Active Ink software, and pressed Convert Ink to Text. It handled the conversion perfectly. It might be worth noting that the form was created by Active Ink’s Steve Hoffman on a Tablet PC running XP Tablet Edition.

So here is the value for a business with both non-Tablet PCs and Tablet PCs deployed: ink generated on Tablet PCs can be searched on and converted by non-Tablet PCs. As long as the non-Tablet PC has Vista installed, it will be a seamless issue. When a business is making a decision on whether to implement Tablet PC functionality, the decision maker can focus on just implementing Tablet PCs where ink collection is necessary. The cost of implementation goes down as a result. Tablet as a feature in Vista is good for business and good for document sharing.

Look for the InkShow on Active Ink Software in July.

Before: A form created with an XP based Tablet PC

After: The ink form converted to text on a Vista based non-Tablet PC 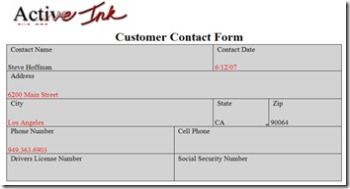