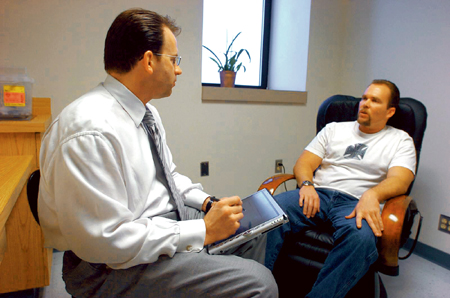 If you have spent any time in a doctors office the past several years, you know that Electronic Medical Records are making some real headway. In fact, it is becoming quite normal to see doctors and their staff toting around Tablet PCs in and out of exam rooms.

Switching to an electronic form of patient record keeping certainly begins to raise some very challenging technology integration issues, training issues, learning how to interact with the patient and the computer at the same time, and the obvious security concerns.

In this article from ITWorld.com, Nancy Well profiles some practices in California that have begun to make the switch.

The Family Practice Medical Group in Oakland is a pilot site for the EMR system, going live in March of 2005, and now “retires” between 10 and 12 paper record files in any given day, said Dr. Careen Whitley, a family practitioner there. The staff prioritized which patients’ records should be moved from paper to electronic form first, with those who need the most ongoing care at the top of the list.

“On day one, it’s a matter of knowing where things are and learning how to navigate the system,” she said of the switch to using a tablet PC while she talks to patients. She used to dictate notes for transcription later, but now she types notes as she goes along. “It’s splitting your brain in two,” she said of the transition. “Part of you wants to take care of the medical problem the patient has and be compassionate and engaged and the other part of you is trying to figure out the computer.”

But soon enough, the computer element of the EMR became more rote. Even so “there are times when you can’t be on the computer and examining the patient at the same time,” she said. “I need to grow two more arms to do that.”