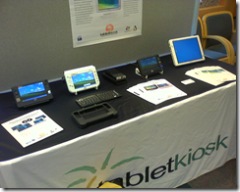 TabletKiosk is here at WIPTE.   They have the i440D running XP on display and they also have the eoTuffTab sitting on the table as well.  I have some video of the 2 devices later on, but thought I would put up a picture here so you can see they are supporting Tablet PC’s in education.

Fujitsu is just around the corner, picture from there soon!! (video later as well)