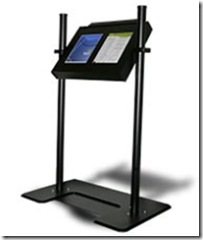 Headed to the Parkland Memorial Hospital ER? Chances are good that you will be greeted by a TabletKiosk touch-based kiosk.

Implemented two weeks ago, the kiosk system is helping to streamline the processing of new patients. While kinks are still being worked out and folks are having a mixed reaction to the system, the future of the touch based kiosk looks bright

“It was real efficient,” said Ms. Beachum, who didn’t have to wait in a long line or worry about eavesdroppers. “Nobody can hear.”

While similar machines are popping up nationally to check in patients at medical clinics, Parkland officials said they believe they are among the first to have a system in a hospital emergency room. A donation through UT Southwestern Medical School paid for the $50,000 project.

The kiosks went up just two weeks ago, and kinks are still being worked out. Because of the people served at the public hospital – including a large indigent population – the technology can present challenges. The machines look and operate a lot like automated check-in kiosks at the airport.

“A lot of these folks don’t use a computer at all,” said Jamie Ensminger, a nurse in charge of the project. “They get really aggravated.”

But Parkland personnel stand by to give directions and type in information for people who need help, and the hospital continues to adjust to make the system more user-friendly, he said.