Okay, I decided to go ahead and attack the battery on the eo i7210 Ultra-Mobile PC.  I used Battery Eater Pro 2.6 (BEP) as my weapon of choice, for no other reason other than I had seen it used here by Jeffrey Graebner on the eo v7110 where he also tested the extended battery for that unit, and thought it would be a good comparison.  Kevin Tofel has also used this tool for some testing on his Samsung Q1,and is in fact the one who recommended the tool to the community.  Let’s stick with this tool as we compare reviews, okay fellow “Techno Geeks”?  :-)

I configured BEP to be as aggressive as possible, turned on all hardware controls such as Bluetooth, Wifi, Camera, etc., and ran the test on a fully charged battery.  I was looking for worst case scenario on this test, so please note that you should never experience LESS than this time on a new battery in this unit.  I will do some real world tests soon as well on things like watching a DVD (externally connected as well as ripped to the hard drive), listening to music, etc., but for now wanted to hit it hard and fast.

The results?  Here ya go — the actual BEP test report! (sorry for the small size, wanted to get it all in the post, and it has some good info in it, click the image for a larger version!) 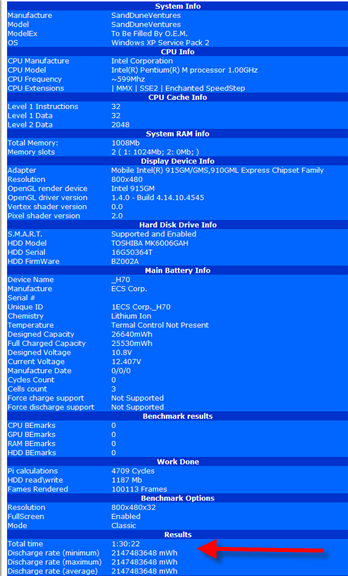 Bottom line on a major attack?  An hour and 30 minutes.  Not bad in my opinion, especially when you consider the currently available battery technology, and the components contained in this machine.  This test pretty much agrees with what the “re-engineered” eo v7110 did on standard battery for Jeffrey Graebner but I also want to see an extended battery made available!

Let’s face it folks, the reality is that if you want anywhere near an all day usage scenario on any Ultra-Mobile PC, you will need to have multiple batteries available.  I have done this for years with Tablet PC’s, I always buy an extra battery with each one I have owned, and I buy extended if it is available.  The real hassle there is keeping multiple batteries charged without some type of “gang” charger, and they want an arm and a leg for those nowadays if they are even available.  I have adopted pretty good battery saving habits like brightness adjustments, putting units into standby when not using, etc., and it works out fine.  Very rarely do I find myself out of battery when needed.

My unscientific tests so far in my time using this unit are averaging around 2 hours of consistent use, maybe a bit more, but I will do more scenario based tests later as I indicated.  Oh, and one other note on this test. I let the eo adjust brightness down to it’s minimum level (which still appears to me to be about 70% and looks really great) as well, so technically it could be adjusted up to full brightness and kill battery faster, but I would never do that in a real usage scenario, so it made sense to me to keep the level practical.  I have not found a way to manually adjust brightness down any further, the buttons on the right side go to that level as a bottom adjustment.  It could go dimmer and still be very usable in my opinion.

So — bottom line, I am happy with the battery performance of the eo, but not happy with the current state of battery technology as a whole.  I want better batteries, but that is certainly not a fault of TabletKiosk’s configuration.   I still find it amazing that we cannot get a better, more practical battery technology for these things, but alas, admit to my ignorance on the current state of this technology.  Oh well, it is what it is.