Due to feedback from OEMs and our readers, we are beginning a new feature series where we open up the floor to hear directly from OEMs. In this inaugural article, TabletKiosk’s Gail Levy talks to us about touch, the different types of touch systems, and how their customers are using touch-based slate tablet pcs and UMPCs to solve real business problems.

Be sure to post your questions and comments to hear more from TabletKiosk. 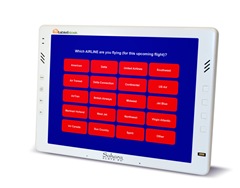 Warner’s recent GBM Inkshow review of the Sahara Slate PC ® i440D did a great job describing the device’s innovative, new dual mode screen and how it can switch between active digitizer and touch screen input. To demonstrate, Warner opened Windows Journal and provided a side-by-side inking comparison. First he wrote ““GBM Rocks!!!Ã¢â‚¬Â with the stylus pen utilizing the active digitizer, then he switched to touch screen mode and did it again using his fingernail.

Watching this demonstration, it struck me that many seasoned Tablet PC reviewers, including Warner, evaluate the i440D’s touch screen capabilities by focusing on note taking, data entry and digital inking. Considering that these reviewers are intimately familiar with the functionality of the Tablet PC platform, this makes perfect sense.

GBM readers, however, may be surprised to learn that the majority of TabletKiosk’s enterprise customers do not employ handwriting recognition on our touch screen devices. Instead, they use our Sahara Slate PCs and eoÃ¢â€žÂ¢ UMPCs primarily to run pure-touch, menu driven applications that do not require any inking capabilities at all. Their highly mobile, highly efficient applications gather information via quick taps on the touch screen in response to ““yes and noÃ¢â‚¬Â questions, survey queries and basic text input on a virtual keyboard.

Because of their durability and versatility, all TabletKiosk touch screen Tablet PCs and UMPCs operate using resistive touch technology. Our slate style PCs are utilized in a wide array of business functions including restaurant point-of-sale, industrial control and home automation as well as other mobile applications where direct finger touch is not always desirable. For example, a survey group collecting a dense array of data may prefer the more precise control provided by a stylus, or medical professionals may work in an environment where they are required to wear gloves when inputting patient information.

To better illustrate how our touch screen Tablet PCs and UMPCs are used without digital inking in our target enterprise markets, here is a brief overview of how some TabletKiosk partners have successfully integrated our technology into their business models.

As an authorized distributor for TouchPoll, Inc., Touchpoll Orlando provides an innovative research system that collects survey feedback entered on a touch screen for real-time data input and tabulation. For their mobile projects, TouchPoll Orlando utilizes the Sahara Slate PC ® i412T to create a lightweight and portable ““kioskÃ¢â‚¬Â that field agents use to gather responses from survey participants.

For a recent deployment in a Florida airport, Touchpoll Orlando surveyors handed out Sahara Slate PCs to willing participants waiting at flight departure gates. To answer the survey questions, participants entered responses by touching the screen with their finger.

Because no writing was required, the survey information was collected quickly, typically taking between 3-5 minutes. The touch screen interface on the Sahara Slate PCs provided an inviting survey environment where all participants, regardless of demographic, felt comfortable answering the questions at their own pace.

Due to the deployment of Tablet PCs, TouchPoll Orlando’s survey staff encountered a nearly impossible 90% ““yesÃ¢â‚¬Â rate of respondents willing to participate in the mobile survey. This high level of participation provided the airport with the most reliable data culled from the broadest representation of travelers who experienced a quick and fun survey experience.

Squirrel Systems, a Vancouver based provider of complete restaurant Point of Sale (POS) and management systems is an industry leader, helping over 10,000 restaurants with all of their Point of Sale needs.

The company’s latest POS system, SquirrelOne, is a fully modular and highly scalable software system, designed for restaurant flexibility. The traditional SquirrelOne installation uses an LCD touch screen on a desktop terminal to input orders and access back office functions. To offer additional flexibility, Squirrel Systems recently began offering the eoÃ¢â€žÂ¢ i7209, paired with a magnetic stripe reader, as a fully mobile point of sale solution. The eo i7209 enables restaurant staff members to place orders wirelessly and process credit card transactions at the table or at curbside.

Managers use the mobile touch screen to perform all back office and front of house POS functions from anywhere in the restaurant, thus allowing them to be out on the floor where they have the most impact. Whether receiving alerts on speed of service issues, reviewing online labor statistics, or pulling up customer loyalty information, the SquirrelOne /TabletKiosk combination provides a powerful mobile productivity tool to enhance the total guest experience.

Previously, in order to obtain real time information and alerts out on the restaurant floor, management and staff had to rely on small pocket PDA devices and pagers. Due to their tiny screen size, staff had to be specially trained on the PDA’s user interface which differed from that of the desktop touch screen POS terminals, and in an industry with typically high employee turnover, training staff on both interfaces was problematic, time consuming and costly. Using the eo i7209 as a mobile POS terminal eliminates the need for additional U.I. training which ultimately saves valuable restaurant resources.

The QDS solution provides a simple, multimedia experience for potential donors by having them privately enter all personal information and answer 48 questions using the touch-screen of the Sahara Slate PC.

To initiate the self-interview, a staff member enters the donor’s blood center ID and name into the system. The donor is then left alone to respond by touching the screen to answer ““yesÃ¢â‚¬Â or ““noÃ¢â‚¬Â to questions about their health history. The donors are guided by a few tutorial screens while listening to the simple audio instructions through a headphone.

Participating blood banks have found that by using the Sahara touch screen solution, they can speed up the donor registration process by five minutes and reduce input errors by over 60%.

In a standard Lagotek installation, a small touchscreen wireless controller (the HIP-100), using Z-Wave and Wi-Fi signals, is usually installed in place of a standard 2-switch light switch. This controller is used to automate and remotely command and control the major appliances and entertainment systems throughout the house.

To offer the utmost flexibility, Lagotek has recently incorporated the eoÃ¢â€žÂ¢ v7110 UMPC as their mobile access point to control all of the systems from anywhere in the house via mobile touch screen and Wi-Fi communication. By mounting the eoÃ¢â€žÂ¢ v7110 in a quick-release wall bracket, Lagotek provides home owners with a fixed larger display, or a portable and readily accessible device to command their Lagotek home automation system from anywhere in the home, greatly enhancing their lifestyle.

In conclusion, I hope that I have succeeded in providing the GBM community with a clearer picture of how touch screen technology provides enhanced functionality to the established slate Tablet PC and UMPC form factor. By offering the Sahara i400 series with touch only or dual pen/ touch input, we are able to present our customers with new options and tools to create more innovative business solutions.