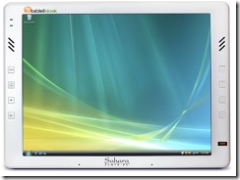 TabletKiosk has officially announced the launch of their new Sahara i400 line of slate Tablet PCs that we got a sneak peek at during CES. They are available right now for pre-ordering with prices starting at $1795. Shipping varies on configuration, with the i412T shipping in early March. We are really looking forward to doing an InkShow on this new Core Duo slate that will support both touch and pen. What I really like about their new slate, besides the dual input and Core Duo options, are the added pc card and fire-wire support. In addition, I think that TabletKiosk was very smart in implementing the dual input ( touch / pen ) by allowing the user to turn touch on / off with the press of a button.

Here are the specs, followed the official press release:

“We are thrilled with the tremendous support and excitement we are seeing from our partners around the world in support of Windows Vista,” said Brad Goldberg, general manager for Windows at Microsoft. “Our partners play a vital role in the early adoption, development and delivery of Microsoft technologies. By working closely with partners like TabletKiosk, we are helping to provide our mutual customers with a high quality product, seamless technology integration, and improved user experiences.”

Standout features of the Sahara Slate PC i400 series include both touch screen and dual mode screen support, a PCMCIA Type II slot for expansion; eSATA, USB 2.0 and 1394a connectivity; a biometric fingerprint reader and TPM module for added security; four (4) user programmable buttons; build to order (BTO) configurations with up to 4 GB DDR2 RAM and a 160 GB SATA HDD, and the speed and power of the Intel ® CoreÃ¢â€žÂ¢ Duo LV processor.

“We are pleased that TabletKiosk has incorporated the Intel ® CentrinoÃ¢â€žÂ¢ Duo mobile technology platform as part of its redesign of the Sahara brand,” said Erik Reid, Director of Mobile Marketing at Intel Corporation. “At the heart of the platform, the Intel ® CoreÃ¢â€žÂ¢ Duo processor will deliver greater performance and power saving capabilities to enhance the mobile computing experience.”

For additional details and to pre-order, please visit www.tabletkiosk.com.