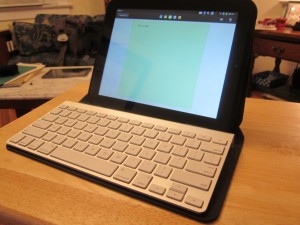 I was one of those folks back when the iPad was first released that thought that Apple was hedging its bets by introducing a Bluetooth keyboard as an accessory. If you’re going to go touch, then go touch. Well, that was an extreme position then and it is now. I never purchased one of those original Bluetooth keyboards, but after I started doing more and more quick jaunts with the iPad that found me having to reply to more emails than I cared to on the virtual keyboard I picked up the Apple Wireless Keyboard, along with the Incase Origami Workstation. I’ve also been using the now discontinued iGo Stowaway Bluetooth Keyboard to great effect. I’m still glad I have that collapsable keyboard around, but there were times where I needed a more rigid solution to really crank out some text.

As I said in this post, it works like a charm with the iPad or the iPad 2, and the Origami Workstation also makes an excellent stand for the Tablet when you are typing. But I was already planning to pick up a couple of other Tablets when I made that purchase and my hope was it would work equally well with any one of them.

Both Samsung and HP sell their own keyboards for use with the Galaxy Tab 10.1 and the TouchPad, respectively. But given this summer of Tablet experimentation, I wasn’t going to put anymore holes in my bank account by picking those up. So, I recently fired up both the Galaxy Tab and the TouchPad to make sure they both worked with the Apple Wireless Keyboard. The good news is that they do. More good news, they fit fine with the Origami Workstation.

The Galaxy Tab 10.1 paired up without a hitch and I was comfortably typing a way in no time. The HP TouchPad has a different pairing procedure that quite frankly left me scratching my head for a bit of time. When you get into the pairing process on the TouchPad you’re presented with a screen that asks for a password or key. You’re also presented with the virtual keyboard, which I found odd, since in most cases you’re meant to enter the password on the physical keyboard. I tried all of the combinations most are familiar with (0000, 1234, no password) and nothing worked.

But a Google search yielded this information. Essentially the TouchPad is asking you to assign a code from the virtual keyboard. You then have a brief period where you enter that same code on the physical keyboard. The unfortunate thing here is that there are no instructions or prompts to tell you that the system is waiting for you to do so. So, you can imagine why I was scratching my head until I found that solution on the web.

With that in mind, I can say that I can pair up the Apple Wireless Keyboard or the Stowaway successfully and be off and running typing, should the need arise.

Keep in mind that both the Samsung and HP keyboards have special keys that are tied to their respective operating systems and you don’t get that same functionality without using those keyboards. That said, on the TouchPad a press of the escape key brings you to the Search Box from wherever you are.

So, I’ve changed my tune on Bluetooth Keyboards a bit. But’s because I view these Tablets as devices to get some work done with.
Other posts in this series: 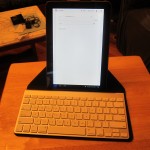 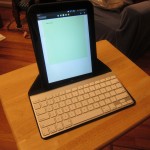 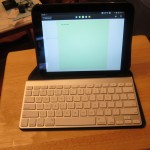 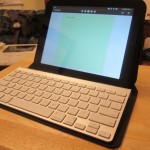