Tablets and Simplicity: The Cloud

Last week I started a series on how Tablets help me with my quest for simplicity. As I said in this post, the quest isn’t one that finds me actively searching for some sort of simple holy grail. Rather, solutions often find me as I test new Apps and new solutions. Tablets promise a new paradigm regardless of whether you view them as consumption or creation devices. One of the keys that make that new paradigm possible is something we’ve been talking about for quite some time and that’s Cloud Computing.

With the advent of Google’s GDrive apparently right around the corner we’ve seen some of the other players make some big moves with their Cloud products lately. Dropbox announced some new changes ahead of Google’s announcement. Microsoft is rolling out updates to its solution,  Skydrive. Apple will most likely roll out supposed improvements to its iCloud later this year. Other third party Cloud services (Box, SugarSync, etc…) will also be working to keep up with the 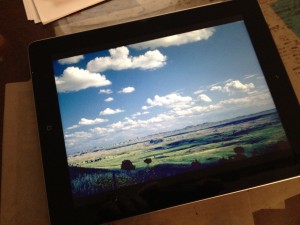 competition. The bottom line here is that everyone wants your stuff in their Cloud and not their competitor’s. The good news for consumers and businesses is that we’ll have choices. But as relates to the big three, (Apple, Google, Microsoft) they are each hoping that their respective Cloud solution becomes the tie that binds you to their OS and other products. The third party folks probably have a leg up in the minds of those who don’t want to be tethered to one of the big companies, but, by an large, you can choose just about any Cloud solution and eventually access your data on any device.

And that’s where simplicity comes into play. Easy, thought free, secure access to your data is the most important factor in my mind. I’ve been relying on a mixture of Dropbox and Apple’s iCloud for my Cloud solution for some time. I’ve got accounts with Box, SugarSync, Microsoft, and I’m sure I’ll have a GDrive account as soon as we know what that means. (Like many I discovered this morning my Google Docs storage jumped up to 5GB, presumably in the run up to GDrive’s release. I don’t use Google Docs much, but when I need to it’s there.) The reason I’ve been relying on Dropbox is that no matter what device I’m on it is a simple no-brainer way for me to save or retrieve any file I need to, when I need to. Apple’s iCloud can’t do that. Yet. It needs to if Apple really wants its users to buy into iCloud. But I do use iCloud for syncing contacts and calendars and some media stuff.

At the moment this mixed solution is drop dead simple for me the way I use computers and Tablets. I should say that, with a few exceptions, I could be doing the same with Box or SugarSync. Of course the next few months will determine if I stay with my current solution or not as I try out other options.

What’s most attractive to me with Dropbox has to do with how I move files back and forth from desktops to my Tablet. Today, I’m prepping for a board meeting later tonight. As I work on my notes, financial data, and agenda items, I simply save the files to Dropbox and when I get to the meeting the documents are there when I need to call them up. Microsoft’s Skydrive offers a similar solution at the moment, and if you’re a OneNote user, Microsoft’s Skydrive makes a lot of sense. Word and Excel files work fine with Dropbox and QuickOffice HD, which is the App I use to access those files in a meeting. But OneNote is still in the Microsoft’s Cloud only, unless you use third party Apps, or Microsoft’s OneNote App to access those files. As much as I like OneNote (remember it is Microsoft’s Killer App that they don’t want anyone to know about), I’ve gotten away from using it the way I used to. I look forward to getting reacquainted with OneNote as I get more and more into Windows 8 and whatever Microsoft rolls out with the Office suite.

As a third party solution, Dropbox has attracted a number of developers who use Dropbox as their file storage solution. In fact, I’d say that Dropbox is the de facto Cloud solution for iOS when it comes to documents and files. Other third party vendors have access to their Clouds via APIs as well, but Dropbox, seems to have a real lead in mind share. And mind share and early leads are going to be important drivers in the race to capture your digital life in the Cloud.

As I said, the downside to all of this Cloud competition will be the choice we as consumer’s have to make. Even though you get some free storage with each solution currently available, eventually, if you use the Cloud the way I do, you’ll need to expand your storage into a plan that requires payment. Monitoring storage in the Cloud is a tedious exercise and defeats the simplicity principle. I suspect in the future consumers will settle on one service and happily pay the freight for extra storage. Look for a new metric to become a quarterly staple of blogs as they begin reporting on which Cloud service as gained/lost the most users in the not to distant future.

But there are other issues out there beyond storage and costs that will affect consumer and business decisions. Security is one of those. Another is reliability. I was a big Microsoft Mesh user back in the day. (Mesh is the predecessor of Skydrive). But I abandoned it after it became unreliable. Again, simple is best. Currently I save a file on my desktop or laptop, leave the office, show up at a meeting, open up my Tablet, and the document is there when I need it. The first time that doesn’t work that simply, or I have to find myself checking to make sure what I need is on my Tablet before I leave the office is the time that I start looking to change Cloud providers.

Apps and applications (do we call them applications anymore?) will also determine which solution users will gravitate towards. I already mentioned OneNote. If that’s your App of choice than Microsoft’s Skydrive will be an easy choice. If you’re into Apple’s suite of work Apps than iCloud eventually might be your path. But Apple has to prove they can pull this off with its iWork suite on Macs. So far they haven’t.  And don’t forget other Cloud solutions like Evernote. For many those kind of solutions can solve most of their needs.

So, what are you thinking about Cloud solutions and your choices? I’ve avoided talking about other Cloud products like Office 365 and Google Docs much here, because I really don’t use them that often. Do you? How much storage is enough for you currently? How much do you think you’ll need in the future? I’d love to know your thoughts as we enter into a new phase of the Cloud Computing wars.