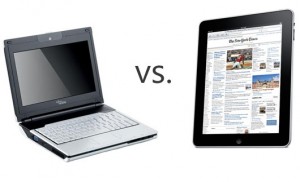 According to a recent study released by ChangeWave, the rising popularity of tablets may be eating into demands for low-cost netbooks, with demand for the Apple iPad leading the pack as consumers are eying what to purchase for the holiday shopping season. ChangeWave says, “The decline of netbooks is attributable to a combination of factors including the end of the recession and the mounting penetration of tablet computers — notably the Apple iPad.” 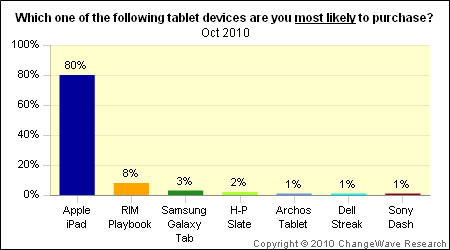 The survey polled 3,108 customers on what they would purchase over the next 90 days and found that only 14 percent of laptop buyers are looking at netbooks, a decline of 10 points from June 2009.

Additionally, from those who are looking at tablet purchases, 80% are eyeing the iPad while the distant second pulled in only 8% of the vote. That spot was held by RIM with its Playbook tablet, which unlike other standalone tablets is meant to be used in conjunction with, or tethered to a BlackBerry smartphone for an optimal experience. Samsung’s Galaxy Tab got 3% of the votes while HP’s Slate 500 managed to swing 2% of the votes. 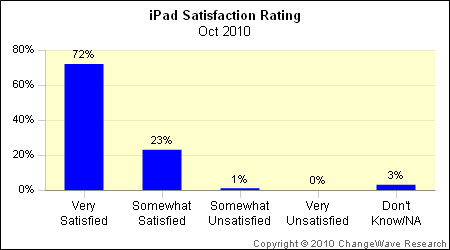 ChangeWave’s survey was released just following Strategy Analytics released their finding that Apple had managed to capture 95% of the tablet market. The iPad had pretty much gone uncontested for months in the consumer space since being released and Samsung only had begun to ship its Android-based Galaxy Tab recently. The ChangeWave survey also finds that early iPad adopters are very satisfied with their purchase decision with only 1% saying they’re unsatisfied. The device garnered a full 73% “Very Satisfied” rating from surveyed users.