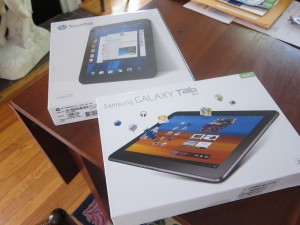 As some of you will recall I’ve been working with the iPad and iPad 2 for some time and have recently picked up an HP TouchPad as well as a Samsung Galaxy Tab 10.1. I’ve been dutifully approaching each of the two new Tablets, not to see how they measure up to the iPad 2, because they don’t come close, but to see which of these Tablets I could use if I had to grab one and spirit off to a meeting and feel content to have it with me as my primary tool in that meeting.

The bottom line for me came yesterday as I’m dealing with some small emergencies at the theatre where I work. I had decided to leave the iPad 2 and the HP TouchPad behind that day and work with just the Galaxy Tab. As I was in town where I live for a doctor’s appointment (versus being at the theatre) some other things came up that I had to deal with. I don’t want to make too much drama out of this, but I was so frazzled by the tasks that lay ahead of me that I swung by the house, ditched the Galaxy Tab, and picked up the iPad 2 to move forward on the work at hand.

The night before that as I was installing OS X Lion on my MacBook Pro, I thought it would be an excellent time to work with both the TouchPad and the Galaxy Tab and also enjoy a bit of leisure time. I did, but when I wanted to check my RSS Feeds, or Twitter, or Google+, I inevitably picked up the iPad to do those tasks, setting down the other Tablet.

Telling? I think so. But let’s look at some context. For most of my theatre work I need to do several things beyond note taking:

That’s it. Everything else is window dressing. Using Apps that are available on each of the Tablets allows me to work on each of the three devices. QuickOffice handles the document chores on all three and I use Dropbox to access those documents. I use GMail and have that on all three so that’s not an issue. While I use PocketInformant on the iPad, I can easily get by with access to Google Calendar on the other two Tablets. All three tie in well to the MiFi card I’m using when I don’t have WiFi, with an exception that I’ll note below.

So, where’s the problem? Bottom line, I’m more comfortable with the iPad 2 and its UI than I am with the other two Tablets at this point. Like I said, I’ve been forcing myself to use each of the two newer Tablets exclusively. But on the Galaxy Tab 10.1 there’s this nagging feeling that something’s missing or something is just not quite right with the Galaxy Tab 10.1. How I relate to that touchscreen always seems like I’m in learning mode rather than operating mode. I have to think too much. The radios on that device also seems to be inferior to those on the iPad 2 and the HP TouchPad as I have a harder time establishing and holding a connection regardless of whether it is WiFi or MiFi.

With the TouchPad, the slowness or sluggishness of the system can just be debilitating when I need to get work done. To be blunt, while I really enjoy the potential of the HP TouchPad, I need to be in a zone where I’ve got some time and patience before I fire it up for doing some real work.

There are many who have written off the Tablet contenders we’ve seen so far released as also rans. I’m in that camp as well.  I’ll keep plugging away with both the Galaxy Tab and the TouchPad when I have the luxury of time and also the luxury of not having a stressful workload. But until HP, Samsung, and Google up their games a notch, I’ll be grabbing the iPad 2 when I need to get things done.
Other posts in this series: