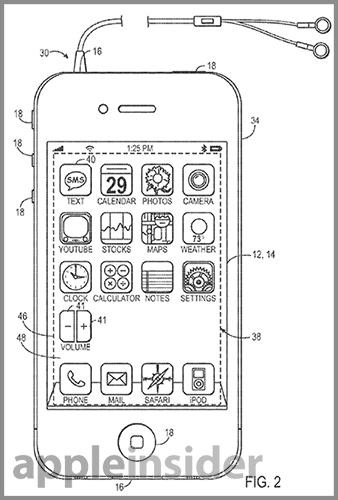 Apple is considering adding another Z dimension to its displays so that the screen can move inwards according to the patent application discovered by Apple Insider. This allows users to have a tactile response when they’re typing with the on-screen keyboard, in one application.

In another situation, a tactile touchscreen display also allows users to have more control of the screen depending on how much force they press. Slightly pressing in on the display may yield one action while pushing down hard into the display could have a stronger effect or even a different effect depending on the app.

Essentially, this would turn your screen into an onscreen button where you can push into the display with varying levels of force.

From LCD to OLED

With flexible displays, Apple would be switching its IPS LCD screens on the current iPhone to the use of OLED screens. OLED screens are more suitable for flexible display applications as they’re thinner than LCD or LED panels, and the switch may have positive and negative consequences for Apple.

For one, it would mean an increased reliance on Samsung for OLED panels as Samsung is currently one of the largest supplier of AMOLED displays, many of those go into the company’s Galaxy S line. In the past, AMOLED panels from Samsung were criticized for having inaccurate and over-saturated colors, though the technology has improved vastly on the Galaxy S4 flagship.

The upside would be better power management, dark blacks and higher contrast.

Not Everything Has to Bend

Apple mentions in its patent that the entire screen doesn’t need to bend or move. Parts of the screen where the user may not interact with often can be made rigid to provide better structural support and integrity. The part where the display needs to move inwards can be made bendable.

And while Apple didn’t mention an iWatch by name as an application of a bendable display, the smaller surface of a watch may benefit from a display that moves to provide tactile feedback, similar to having physical buttons on the watch’s screen.