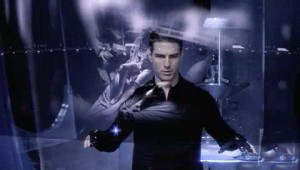 MG Siegler of TechCrunch has a post up about what he calls the future of computing. Not only does he believe it this future of how we interact with our data and the machines that help us do that, but he says it is not only useful but beautiful.

The company in question is called Oblong Industries. They’ve apparently been working on a gesture based experience, initially targeted at companies that do collaborative interaction. But Oblong has an eye cast on the consumer market as well, even thought that’s sometimes off. Siegler describes the system as Minority Report-like. It’s called Mezzanine. But instead of gestures created by hands you use a wand that will remind anyone of a Wii Remote. Apparently the technology for using hands is still too expensive to be implemented at this point, although it does exist.

Siegler feels like this is as disruptive as the original Mackintosh computers were back in the day. We’ll see if that comes to be. But if you follow the links and take a look at the video, there’s no denying that it has amazing potential.