This is the second Talking Angela hoax to arrive in just under a year, and like the first one there is no truth to the rambling claims that the app is trying to steal personal information and trick kids into communicating with Pedophiles and strangers.

The Talking Angela app scare started up again in a Facebook post where a user warns parents in all caps, broken english and words that don’t agree or even match up to the actual app, that Talking Angela is bad news for kids. 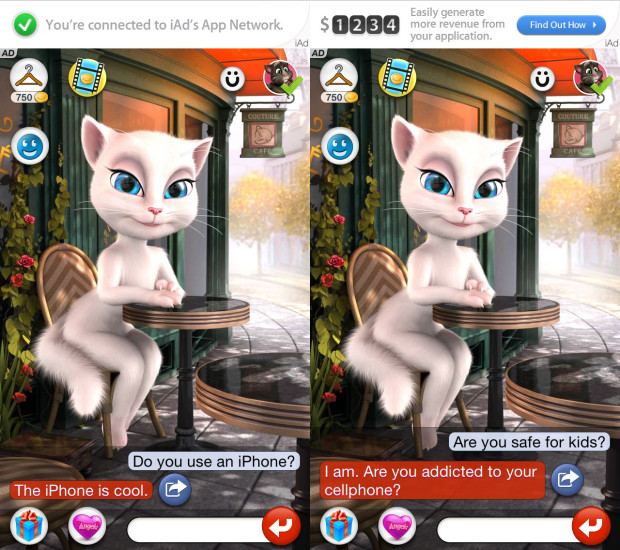 The Talking Angela App hoax about a pedophile ring and a danger to kids pushed the app to the top 10.

Like email chain letters of years past, this warning spread on Facebook before Sophos Naked Security debunked the claims sharing an excerpt of the Talking Angela Facebook rant,

“I cant even in words say what I just found out.. I am SHOCKED and want to tell and let my friends and family be made aware so they can make sure their children are safe!!! Angelica stayed home from school today and thank GOD she did. Because she was on her ipod playing a game called talking angela, which is similar to talking tom, anyway as she is sitting next to me this interactive cat says to her hi angelica where is your brother?…

…So please if your KIDS use this app please shut it down. Because SOME KIDS told them the name of the school they went to and is now on red alert at the school, and please PASS this on to ALL your friends”

Parents concerned about the app took to Facebook to ask questions about the app in Facebook Fan Page and the comments section of posts on the Facebook App are filled with responses defending the Talking Angela app. Here are a few of the most interesting things parents are saying about Talking Angela.

“Anyone who has this needs to delete it especially if your children have it! I got on this earlier just to see what the rumors were about and whoever I was talking to knew my name and knew my hair was down and said “is that why your hair is so messy” whoever is behind this can see you through the camera! Please delete and delete off your child’s phone if they have it!

People are trying to say this is a hoax but it is not. Bottom line I child’s game that is supposed to be for your child should not say things like stick out your tongue and show me and asking how old I am and where I live because that has nothing to do with the game and they def shouldn’t be asking children this! Like if you agree!” – Hailey Tyler

Annie Gathers posts a collection of Talking Angela screenshots calling them, “Weird” and “Still weird”, including this one about tongue action. 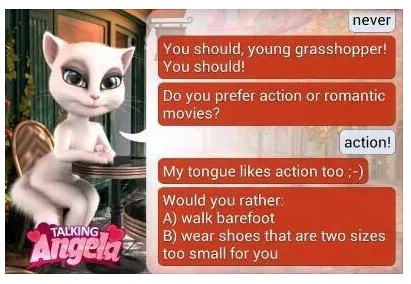 One example of a chat that some find odd for a game for kids.

Kylie McIvor shares a comment warning, “do not let your children use this app report it. peodofiles are accessing your kids,” which sums up a lot of the comments we see on Facebook about this app, despite multiple sources debunking the claims.

All of this attention is pushing the the app to the top of the free iPhone app charts. The downloads spiked overnight as the Talking Angela hoax spread on Twitter. It’s not clear where the big push on Twitter came from, but it appears to originate from the band One Direction or a member of the band or a fan club.

Comments on Twitter range from “scared” teens to those making fun of anyone that downloads the Talking Angela app. Here are some examples.

WTF IS GOING ON WITH TALKING ANGELA

The Talking Angela app is safe according to multiple security experts and the developer issued a statement which appears on Snopes,

“We wish to emphasise that no personal data whatsoever is being collected from the users of our app Talking Angela, which is available as an iOS, Android and Facebook app.

The description clearly informs the user that one of the core functionalities of the app is chat, which requires two-way communication, where Angela (a chat bot, not a real person) answers with text and voice in English and talks to the user about a variety of subjects.

The data collected by the app from the user is not shared with anyone and is actually sent to Out Fit7 only in the form of an anonymized data log (no names, no numbers, no personal data). This fact is clearly disclosed within the description of the app.

The screenshots within the description clearly show that the app enables the user to take a picture of himself/herself and share those pictures to social media services like Facebook or Twitter. This is only done if the user wants to do it and the photos are not sent anywhere else.”

The Talking Angela app is available on iPhone and Android.