The official start of the holiday season in the United States may be a few weeks away, however Target is hoping to get users in stores a bit early by upping its trade-in value on  Apple’s entire line of  iPads.

The deals, which began today allow users to trade-in the first generation iPad for $200 in Target store credit. While users can only spend that gift card in-store or online that double than the amount all the gadget trade-in services are offering for an iPad with 16GB of storage and just Wi-Fi connectivity.

Trading in that same device to Gazelle would net a user just $80 if the iPad was in flawless condition. Amazon says that users could only get up to $120 in Amazon Store credit if they traded in an iPad with the same specifications. GameStop had the lowest value of all. It allows users to trade in a like-new first-generation iPad for $40.00 in store credit or $32 in cash. 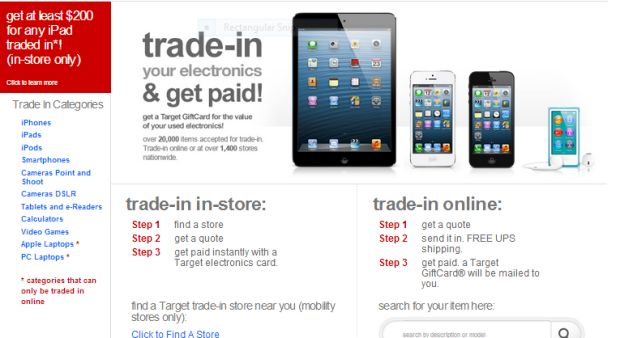 Target says that users will get $200 for any iPad that they trade-in as a minimum. So while the first-generation iPad may only net a user $200, later iPads may net users even more in trade-in value. Users have until November 9th to trade-in their iPad before Target’s iPad trade-in values return to normal.

The retail company is also reminding users that they should call at ahead to their local store before arriving to trade-in their iPad or any other electronics. That’s because every Target store doesn’t participate in the electronics trade-in program. Users can trade-in their device to Target online and receive their gift card in the mail if they aren’t near a location that does offer the program

So far, Target’s deal is the best thing out there for users with an older iPad they aren’t using. It’s also a great deal for those who simply want to upgrade to Apple’s iPad Air or the new iPad mini. Target sells both of those tablets along with the Apple TV and Apple’s entire line of iPods.