As part of its weekly slate of technology deals, retailer Target is offering gift cards with the purchase of most of Apple’s latest devices like the iPhone 5, iPad 5 and iPod Touch.

While Target does offer the complete line of iPads, like those with mobile data connectivity, only users who purchase the iPad with Retina Display and the iPad 2 will be eligible for the free gift card. 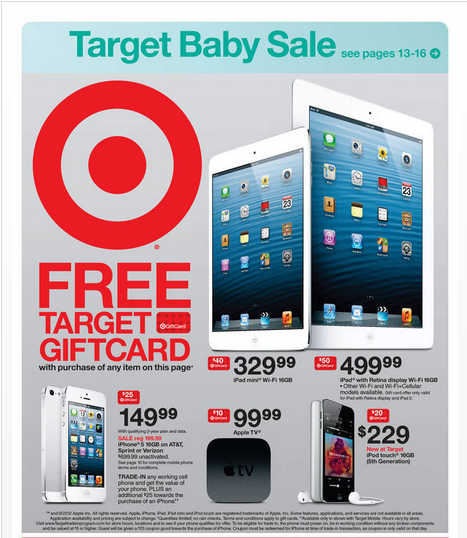 Target is also offering the 5th generation iPod Touch with 16GB of onboard storage with a $20 Target gift card for $229. As the 5th generation iPod Touch offers many of the features of the iPhone 5 without the need for a service contract, it could be perfect for budding technologists who aren’t ready for the responsibility and cost of a monthly bill.

Finally, Target will give users a $10 gift card with the purchase of an Apple TV. That device now sets users back $99.99 and lets them stream all of their iTunes audio and video content to their television set.

These deals are specific to the Target store in each area. For example, some Target locations we contacted didn’t offer any version of the iPhone 5. Target also won’t be offering rain checks, so when supplies run out: that’s it.

A quick call to Target yielded a few extra details than what the company’s advertisement provides. The gift card included with the purchase can only be used on later purchases and cannot be used to buy other gift cards. For example, users will not be able to use the gift cards towards purchasing iTunes gift cards.