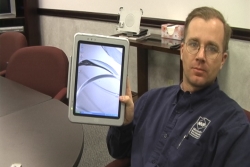 In this video review, what we are now officially calling ““ Hardware InkShows ““, I take a look at the TC1100 Tablet PC. Since its intoduction in November 2002, the TC1x00 has maintained an almost cult-like following due to its design and flexability. The TC1100 has also been a favorite in Hollywood, being featured alot on shows like 24 and Alias. It was a sad day in Tablet Land when HP announced that they were discontinuing the TC1100 in favor of producing ““me tooÃ¢â‚¬Â like designs in the TC4x00 series.

In this review, I take a tour of the tablet in keyboard and slate mode, the ports and buttons, the docking station, modular cd drive, protective cover, the built-in legs, the QuickLook utility and other software utilities.

The lighting in this video turned out better than my previous two videos, but I think Dennis and I are going to have to invest in some mini spot-lights to ensure the best lighting possible.

Although the TC1100 has been discontinued by HP, you can still buy it from HP, CDW, and other channels until the inventory has been cleared out.

By the way, I found it really interesting when visiting HP’s site to read how they describe their Tablet PCs: The ultramobile PC that adapts to the way you work. Hmm..I don’t think I would describe the 12Ã¢â‚¬Â TC4400, the only Tablet PC they produce right now, as an ultramobile pc. They also use a thumbnail picture of the discontinued TC1100 to represent their Tablet PC line. Pretty ironic, huh?