Mobile tech and computer technology in general is supposed to make our lives a little easier. Or so the theory goes. But then we all know that old cliché: “technology, it’s great when it works.” When technology does work it can indeed make our lives easier. But when it doesn’t it sends any user into a downward spiral of frustration and often anger. When that happens clichés and reasoned explanations don’t serve to soothe and salve. Of late, it also creates large political and social issues as well. A few weeks back we wondered aloud if we’d ever see a big tech rollout that wouldn’t fail. You know that developers and strategists who design large projects don’t set out to fail when they begin, but things can and do go wrong. Murphy still has a law, last I looked. The larger the effort, the brighter the spotlight that illuminates the failing. 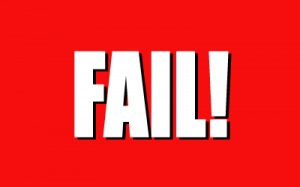 Take for example this year’s big Walmart Black Friday 1 Hour Guarantee. Walmart guaranteed that some select products would be available for those customers who made it into the store within the first hour. Turns out the website that allows customers to register for the deal if the products they wanted weren’t available isn’t working all that well. Cue angry customers and lots of headlines.

And of course there is the Affordable Health Care Act where failures in the online system have been rampant. This was supposed to be the weekend by which the problems were solved. Early reports say that there are still issues. Talk about adding fuel to the old adage and simmering fire that government can’t do anything right. This failure was akin to dropping accelerant on a small blaze.

There are a couple of other instances of this kind of technology failure that are circulating around the Chicago area where I live. There’s a common thread here with all of these issues. These failures cost users money and nothing gets someone angrier than messing with their pocketbooks.

Ventra is the payment system for rapid transit in the Chicago area. It replaces the older systems of paper cards, tokens, and cash, theoretically making life easier for everyone and less expensive to manage the system. The roll out was not without problems causing loud complaints and much political face saving.

This was discovered when customers noticed it on their bills and started complaining to both Ventra and their banks. You can imagine the chaos this is adding to an already unsuccessful roll out.

Another has to do with Chicago’s installation of speed limit enforcement cameras. This is a tricky area in and of itself as many think this kind of technology controlled law enforcement ventures too far into the land of police state monitoring. (Side note: if someone ever tells you in a debate that we’re a nation of laws here in the US, ask them if they ever break the speed limit. ) In early roll outs the cameras have reportedly reduced speeding by 60%. But there have been some glitches. Turns out one lady was issued a warning for speeding, even though her car was parked at the location where it was flagged. Oops!

There are safeguards built into the system that allow drivers to log into the system and see if they were indeed speeding. This one customer did exactly that. She saw her car was indeed parked at the time. We all know the drill when these things happen. Errors and failures are called one-time failures or problems that only affect a small percentage of users. If we’re not affected personally we seem to accept that and move on because, well, you know, that old cliché about technology.

Thinking about this logically, I’m not sure there will ever be a way to roll out these kinds of projects without problems. How do you test these kind of efforts at scale? What happens when systems actually meet users in real time?  Controlled tests and roll outs can’t discover every possible scenario. Does a company or team in charge of one of these roll outs need to budget for failure?

These may indeed be unsolvable issues. But because of the difficulty and complexity involved in designing and rolling out these big initiatives, we shouldn’t let the marketing mavens and politicians off the hook when systems fail. They create the expectation for success. But then they have to. But if we’re already discounting their expectation game before it starts, we’re in a very interesting place where trust takes a back seat to skepticism.

These are questions we will all continue to face in the years ahead on some level as governments and businesses look to technology to modernize and save costs. The current environment seems to be one where progress is measured by how little we fail instead of how much we accomplish.