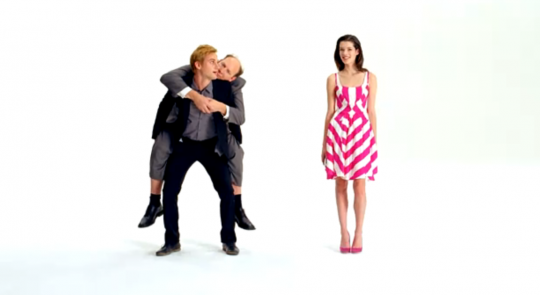 Given that it’s election night here in the U.S., I am really curious how you, dear readers of GottaBeMobile, respond to negative ads on technology. While negative ads in the political arena are all too common these days with candidates airing out their rival’s dirty laundry, we’re beginning to see that more in technology. Given it is election night, it seems sort of apropos that T-Mobile USA just also debuted an ad of its “4G” HSPA+ network, slinging mud at its GSM brethren AT&T and the iPhone 4; the video is posted below for you to view.

I don’t know about you, but when I see the young lady in magenta in that video spot, all I can think of is “Did T-Mobile USA replace the endearing Catherine Zeta Jones for a 20-year-old?” But that’s besides the point. T-Mobile is really trying to get users to move to its “4G” network–but really, is it even 4G–and that Apple and AT&T doesn’t offer video chat on 3G, let alone 4G.

Other examples of clashing opponents who bash upon each other in the mobile tech sphere include Verizon Wireless with its now infamous “Droid Does” campaign, highlighting what Droid–and by proxy Android–is capable of doing, mocking AT&T and the iPhone. Another Verizon Wireless campaign in the past had highlighted that “There is a Map for That,” which, as you can guess, highlight’s the carrier’s great coverage and pokes fun of AT&T’s dropped calls and spotty reception by using Apple’s “There’s an app for that” trademarked slogan.

I would imagine that for the geeks reading this post on GottaBeMobile, all this mudslinging must be entertaining to watch–T-Mobile mocking AT&T’s 3G network, Apple duking it out with Verizon Wireless, but I must wonder what impact these ads have on the average consumer and their buying decision. With much of America still on feature phones and the emergence of smartphone just starting to get underway with Apple’s iPhone and Verizon Wireless’s growing Droid brand, do you think negative tech ads will confuse the general demographics that these ads are supposed to sway? According to a Wikipedia entry on negative campaigning, “running back-to-back sequences of attack ads may do more damage to the candidate than to the opponent, particularly if the attack ads utilize the technique of mudslinging, where the negative information presented is of little relevance or value to the overall political process.”

Perhaps, however, some technology firms have mastered the political art of negative campaigning. Apple, for one, being a dominant smartphone player, hasn’t attacked its opponents via ads–it’s true that Steve Jobs throws a couple sly remarks at his competitors to media and bloggers, but you don’t really see a negative ad done by Apple. The company’s Mac and PC ads are always whimsical, and in that situation, the Mac is not the dominant platform. According to the same Wikipedia entry, “voters typically hold challengers and incumbents to different standards. This is because the incumbent is expected to use more positive campaigning strategies than a challenger as the challenger is trying to prove why he or she is more worthy of the elected position than the incumbent.”

Typically with these ads, only part of the story is being painted. T-Mobile’s ads only tell the story of one negative about the iPhone–no video chat over 3G and ignores the many positive apps; Verizon’s Droid Does doesn’t tell how Apple’s App Store changed the mobile landscape. That’s not to say that there aren’t two sides to the equation, but do these ads really place the burden on consumers? And coincidently, also on geeks like you and I to educate our technologically not-so-inclined populace? Then again, many people think the iPhone 4 is really an iPhone 4G, and then as my friend Jeb Brilliant, of abrilliantblog.com fame, tells me, people ask him why the iPhone “4G” doesn’t have 4G speeds. The average non-geek consumer already seems confused without mudslinging. Caveat emptor!