Texting and driving is a major problem for teens and adults. The temptation to fire off a fast text or check an incoming message while behind the wheel is too much for many to ignore.

We’ve seen gruesome anti-texting while driving ad campaigns and somber anti-texting ads before, but a new campaign from a Belgian advocacy group takes a different approach — telling teens they have to text and drive to pass their driving test.

Surprisingly, when instructors force teens to text and drive the teens fail horribly and admit that it is ‘impossible’ to text and drive. Watch the damage as teens try to text and drive while taking a driving test after being told that they must show skill in texting behind the wheel before they can take to the streets.

In the video students crash into cones as the instructor says, “Imagine that’s a child.”, and students can barely keep their cars on the road as they text simple messages like “I’ll be back tonight.”, “I will get French fries.” and “We’ll be a bit late.”

At one point the instructor criticizes the spelling of “scool” as a driver struggles to focus on driving and texting. Shortly after, the instructor ends up almost flying through the window, just like an unrestrained teen passenger might. 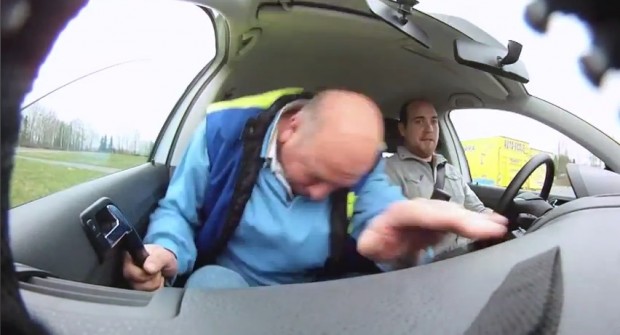 In addition to texting while driving, a recent study found that there’s an increased danger from App’ing while driving. 10 percent of survey respondents admit to using apps every time they drive.