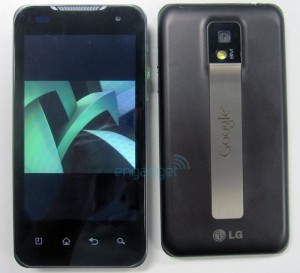 The Tegra-2 powered LG Star that we had seen floating around on the Internet previously was just given some hands-on time over at GSM Israel and confirms some of the rumored specs that we’ve seen prior, including a dual-core NVIDIA Tegra 2 processor, 8-megapixel rear camera, HDMI port, and a front-facing camera for video chat.

The device shown was running Android 2.2, also known as Froyo, though it’s unclear if by the time that the Star is released LG will keep Android 2.2 or launch the device with the newer Android 2.3 Gingerbread operating system. Android 2.3 is believed to be an incremental Android update, and not a major update, which would bring a number of improvements but not revolutionary features. With Android 2.2 Froyo, the LG Star should be able to handle Adobe Flash content without any problems.

Also, on top of Android, LG has bundled its proprietary user interface. LG’s interface, also called the S Class UI, is similar to what Samsung had done with its Galaxy S smartphones and the TouchWiz UI. Various Android makers have bundled their own UI on top of Android–HTC uses the HTC Sense UI while Motorola uses MOTO BLUR–to differentiate their handsets from competing offerings.

The display on the LG Star measures 4 inches, which is the same size as Samsung’s Galaxy S handsets.