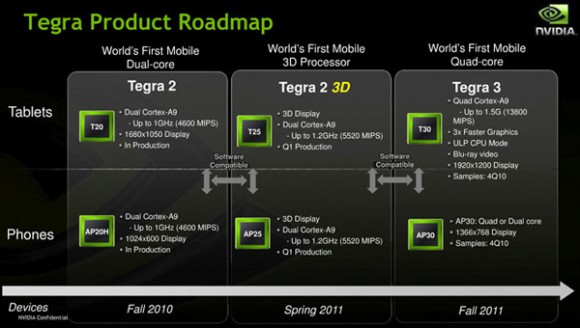 Along with going 3D for its Tegra 2 processors in Spring, NVIDIA will be upping the mobile processing ante with a quad-core Tegra 3 release come this fall according to a leaked slide revealing the company’s roadmap obtained by Engadget. The leak isn’t surprising as the company had previously already alluded to quad-core mobile processors in the past, saying that it was “coming soon,” and rumors of a quad-core CPU announcement has been swirling leading up to the Mobile World Congress trade event.

For Tegra 3, the leaked slide reveals that NVIDIA is expecting up to 3 times better graphics performance with its System on a Chip design. The Tegra 3 is clocked at 1.5 GHz and promises Blu-ray decoding on tablets and will support tablet resolutions of 1920 X 1200. These chips are expected to be sampled to OEMs in the fourth quarter, so we probably won’t see tablets shipping with Tegra 3 until 2012.

The company has been so far successful with its Tegra 2 push despite low adoption from manufacturers for its original Tegra 1 chip. The dual-core ARM Cortex A9-based Tegra 2 is powering a number of popular gadgets that were announced earlier this year at the Consumer Electronics Show, including the LG Optimus 2X, the Motorola Atrix 4G for AT&T, and the Motorola Xoom Honeycomb Android 3.0 tablet for Verizon Wireless. In fact, NVIDIA was able to secure its dual-core Tegra 2 chipset as a reference design for Google’s Android-based tablets.