Accessories Apple how to

Apple charges $20 for a regular three-foot long USB Lightning cable, so if you bought three extra cables — one for your car, your travel bag and your office at work — that’s $60 right there. So, you might be looking into alternatives. Amazon sells its own Lightning cables under its “AmazonBasics” brand for $14 each; that’s still not cheap by any means, but it beats paying $20.

The only problem with the Amazon variant is that the plastic around the connector is chunkier than Apple’s version, which means that if you have a case on your iPhone (like I do), the Amazon cables won’t fit. Thus, you’re forced to use Apple’s own cables in order to get something that fits. 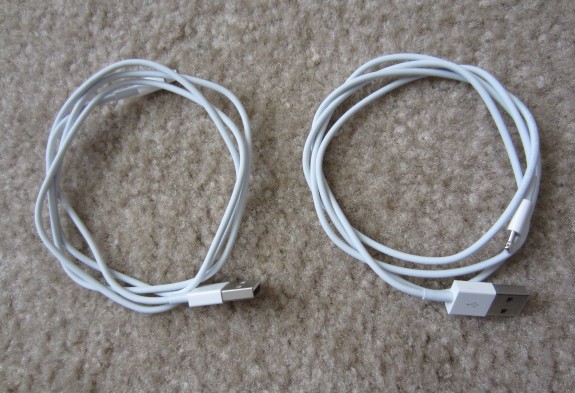 Which Lighting cable is genuine? It’s hard to tell at first glace..

With that said, I was forced to get Apple’s genuine OEM Lightning cables, but I wasn’t willing to shell out $20 a piece for them, so I went hunting on eBay in the hopes of finding someone getting rid of their Lightning cables because they switched to Android. I was aware that eBay was full of Chinese ripoffs that claimed to be genuine Lightning cables, but I found a listing that was selling “genuine” cables for around $11 a piece and was located inside the US. They were probably still fakes, but I pulled the trigger anyway, with the plan that I would file a complaint and get a refund if they were, indeed, fakes.

Indeed, the cables were fakes, but I decided to take the time and see what exactly the differences were between the fake and genuine Lightning cables. Obviously, the chips and circuitry inside are different, and the Chinese ripoff cables don’t have the genuine chips on the inside that correctly control the flow of the charge, but you can’t see that with the naked eye. With that said, here are some tips to check whether a Lightning cable is genuine or not. 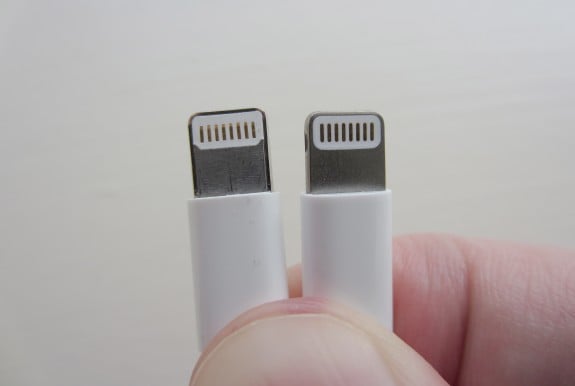 The clearest difference is that the genuine Lightning cable on the right has the white piece perfectly rounded in the corners, while the fake one on the left is squared off somewhat. Furthermore, the entire metal piece of the genuine connector is one single metal piece, while the knockoff is made out of several metal pieces pressed together. The knockoff version is also slightly longer than the genuine version.

On the USB plug end of the cables, the white plastic pieces are practically identical to one another, which can make it difficult to differentiate the two just by glancing at it. However, just like with the Lightning connector end, the differences lie in the details. 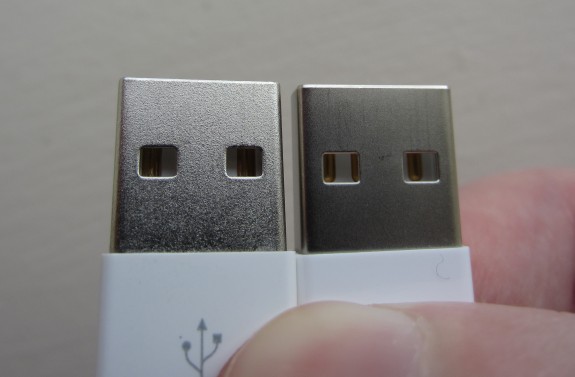 The only difference on the USB plug is a pretty big one. The genuine one is on the right, with the knockoff one on the left. The knockoff’s metal USB connector is a lot more grainy than the genuine one, which is perfectly smooth. This most likely has something to do with the type of metal that the USB plugs are made out of; it’s more than likely that the knockoff cable uses a cheaper metal or manufacturing process to make the plug, thus leaving a rough, grainy surface to the metal.

So, just by looking at both ends of the cable, you can clearly deduce which cable is the genuine one and which one is the knockoff. However, this one seals the deal. Every Apple Lightning cable comes with a serial number and text that reads, “Designed by Apple in California, Assembled in China.” Obviously, to make sure that knockoffs are as accurate as possible, they also include that same text and a serial number. 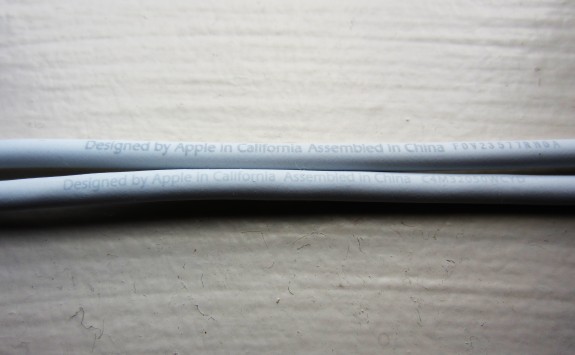 However, as you can see from the photo above, the style and shade of the text are vastly different. The genuine cable is on the bottom and the knockoff cable is on the top. If you know the font that Apple uses on all of its products, then you can tell that the bottom one is the genuine cable. The top one sports a different font that Apple doesn’t use, as well as a darker shade of gray.

So, the next time you go out and buy a cable, look for these signs to make sure you’re buying a real, genuine Apple Lightning cable. Of course, going straight to an Apple Store or ordering one on Apple’s website will guarantee that you get a real Lightning cable, but if you’re wanting to save a little cash, you’ll definitely want to be cautious when you go out hunting for deals.