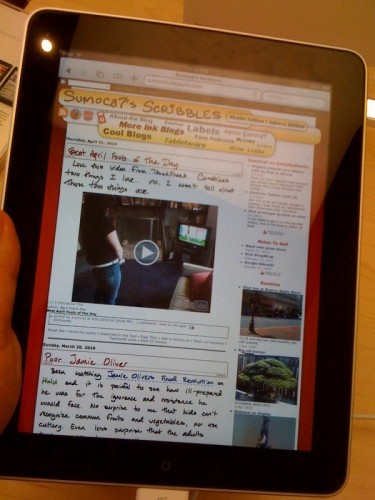 Sorry folks, I know many of you were expecting iPad hands-on impressions from Warner at this point. Sadly, he has been called away for family matters, so the first follow-up to his unboxing video will be my thoughts after handling one in the Apple Store for ten minutes.

I had business in the Reston Town Center today and took the opportunity to stop by the Apple Store there to lay hands on the iPad. Local sheriffs were on hand to keep the peace. I wouldn’t expect any problems in this town, but considering there was still a line to buy iPads at 12:30, that was probably a good idea. And judging from the trash, they had Starbucks coffee on hand to soothe the early adopting masses. I walked by the store around that time but didn’t go in until after lunch. Place was still crowded but clear enough that I didn’t have to wait to get to an iPad.

First off, I have to say the iPad feels wonderful in hand. The seamless body feels sturdy and solid. While some people have thought it weighs too much at 1.5 pounds, I need a bit of heft in my devices. The QUE Reader, for example, is too light for me, feeling like it could blow away in a stiff wind. I admit the iPad could stand to be a tad lighter, but it felt just about right to me.

The thing I checked immediately was the keyboard. I tapped out a comment on Warner’s unboxing video from it. As a trained touch typist who lays his fingers on the home row, the keys were way too sensitive for me in two-hand landscape, as seen in the promos. Two-finger hunt-and-peck worked better, so I feel I could improve with practice. I also tried it in portrait mode using both thumbs for typing. That actually worked pretty well for me, but the device is just too wide for that to work comfortably for me. I can reach the side keys easily enough but everything in the middle is a stretch. If they offer a split ‘board option, then it would really work for me.

Other thing that bothered me was the positioning of the nav buttons in Safari and the lack of swipe for back/forward. Unless you are left-handed, I cannot see the logic in placing the back/forward buttons at the upper left corner. I don’t even use those buttons on my Tablet PC anymore, relying entirely on gestures for navigation. Apple needs to implement a two-finger swipe for this (one-finger swipe is read as scrolling).

Interestingly, and this struck me just now, the GottaBeMobile site showed up in its normal view, not the mobile view. I was under the impression, after applying that “Gmail for tablets” trick, the mobile view would be the default.

I also briefly checked the Maps, Photos, and iPod apps. Maps was pretty much the same as the iPhone but bigger. Would have liked more detail in the maps, but that’s a limit of the map, not the iPad. Photos were really cool to use. Two-finger zoom, rotate and move are great in the album view. Music control in the iPod app is a bit like the nav buttons in Safari. Maybe I could get used to it, but from my tablet experience, I much prefer to keep the controls at the bottom or have them available as gestures. Two-finger vertical scroll to control volume and back/forward swiping, for example, would be great to have.

Unless I wanted to spend the rest of the afternoon in the Apple Store (and risk being escorted out by the sheriff), I didn’t bother getting into games or any of the other third-party apps they had installed on the display unit. While it seems I’ve been mostly nitpicky with its drawbacks, the truth is I am really impressed with the device. The responsiveness of the touchscreen is amazing, and I am hyper-sensitive to such things. Even with the gaps in the swipe and gesture control, it is the best touchscreen experience I have encountered to date.

My wife also tried it out while we were there. Her only complaint mirrors my own: it’s not a pen-input device. That’s ironic since she never got into pen input on any of my Tablet PCs, even the one she now uses as her laptop, but she doesn’t like them because they are too thick and heavy. Seems like an iPad with pen input remains the Holy Grail for both of us.