Microsoft’s Surface 3 iPad Air rival only arrived on store shelves this morning, but Microsoft already has a pretty decent Surface 3 deal in the works. Rather than slash the price of the newly available tablet for everyone, Microsoft is rewarding loyal customers who purchased its previous tablets with huge savings when they upgrade.

Microsoft added the very first Surface 3 deal to its retail store website this morning, even before most of the country had taken delivery of the Surface 3 devices they pre-ordered. The deal is intended to reward those who purchased the Surface 3’s predecessors, the Surface 2 and original Surface. Anyone who owns those tablets and are on the lookout for something new should definitely take advantage of this deal. In almost every crucial way, the Surface 3 is better than both the Surface 2 and Surface. 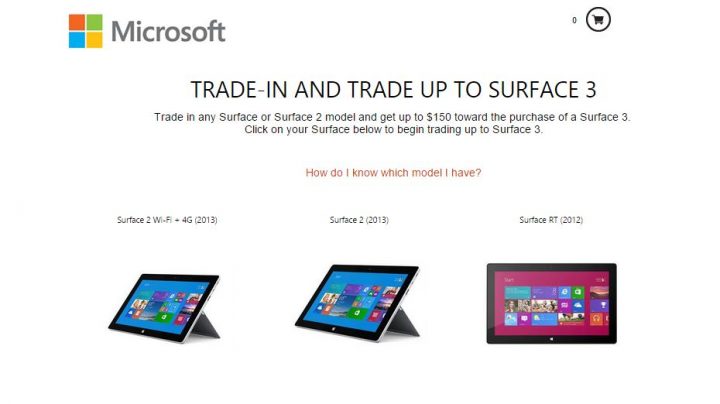 Microsoft has capped the Surface 3 trade-in deal at a $150 promotional credit. To get that full value shoppers need a Surface 2 with a Surface Type Cover or a Surface Touch Cover. An original 32GB Surface device with a Touch Cover gets users $100 in promotion credit towards the purchase of the Surface 3. How much credit they get depends on whether shoppers are trading in a cover and their device’s storage capacity. A cover and more storage means more trade-in credit. By comparison, retail store Best Buy only offers $50 in trade-in credit for the original Surface with no extra accessories beyond a charger.

The original Surface was an awkward, thick tablet with a full-size USB port and a 10-inch display. It was made as an iPad rival that could replicate a notebook thanks to an add-on keyboard and. It was widely panned by critics, mostly because it was painfully slow. Also, because it ran Windows RT, an operating system that had versions of Microsoft’s Office apps and Internet Explorer built-in, but wouldn’t allow users to install Desktop apps like iTunes. It was a disaster.

The Surface 2 added another position for a kickstand, a new paint job and a thinner profile. Microsoft also added a faster processor, but the damage was done. Windows RT effectively kept the Surface 2 from being a hit with users too

The Surface 3 has a high-definition 10.1-inch display, at least 64GB of storage and a full-size USB port. An 8 megapixel rear-facing sensor makes it more competent as a camera than any other Surface. Microsoft ditched the proprietary charging port for a simple MicroUSB port that works with just about every smartphone charger. Users can purchase a Surface Pen and take handwritten notes. There’s a Surface Type Cover for those who need a notebook-like experience.

Most importantly, Microsoft ditched Windows RT for the Surface 3. Forget having to find replacements for your apps in the Windows Store, any app can be loaded onto the Surface 3 directly from the web. That includes apps like iTunes and Google’s Chrome web browser. The change in processor also means that the Surface 3 will get Windows 10 free when it launches later this summer, meanwhile Surface 2 and original Surface buyers will get left behind on Windows RT. An entry-level Surface 3 is $499, but another model with 4GB of RAM instead of 2 and 128GB of storage instead of 64GB costs $599. Surface Pens and Surface Type Covers cost extra for the Surface 3.

Read: Surface Pro 3 vs Surface 3: What You Need to Know

After successfully applying for the Surface 3 deal credit, shoppers will need to send off their device to Microsoft. Once It’s been received and approved they’ll get a promotional credit allowing them to purchase their Surface 3 at a discount. This Surface 3 deal only lasts until May 31st.