Tesla Motors’ Model S all-electric sedan is starting to become a bit of a sales sensation. In the past few weeks Tesla has announced the the Model S exceeded sales estimates. Then Tesla announced that they were the plug-in car sales leader in the United States, by beating the Chevrolet Volt in sales. Finally, Tesla then announced its first profitable quarter ever, beating Wall Street and skeptics all over the globe.

Despite all of the positive stories, skeptics still say the vehicle is too expensive for the “everyday man” and that there needs to be a less expensive option. Recent sales numbers from the big German automakers (Audi, Mercedes-Benz, and BMW) tell a slightly different story. For the first quarter of 2013 Tesla sold more Model S sedans than the others sold similarly priced vehicles. 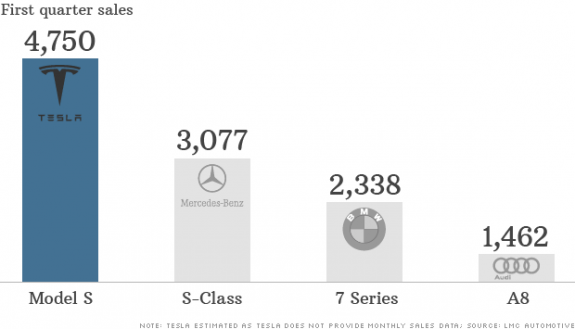 The similarly priced vehicles in question are the Mercedes-Benz S-Class, the BMW 7 Series and the Audi A8. On the surface, it would seem that even though the Model S is expensive compared to a Fiat 500, there are plenty of people out there with the income to purchase a vehicle from a startup manufacturer. Tesla does only sell one vehicle, so if someone wants a Tesla they are “stuck” with a Model S. The Germans offer a full range of vehicles to satisfy the tastes of every type of buyer. It should also be noted that the Tesla is eligible for a $7,500 tax credit in the United States that those German sedans cannot offer. 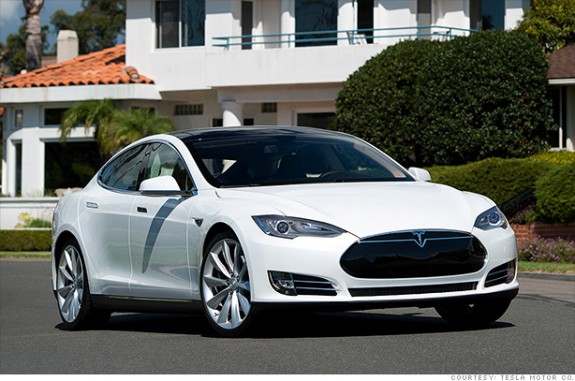 One other possibility for the success of the Model S over the German rivals might actually be the rivals they are comparing the vehicle to. Yes, the S-Class and Model S can be ordered at similar pricing, and the S-Class is a much larger vehicle. The A8, 7 Series, and S-Class are all larger than the Tesla. The Model-S is more comparable in size and features to a 5 Series BMW, E-Class Mercedes-Benz, and A6 Audi.

The Audi A6 Prestige with similar performance starts at $56,590 but includes navigation which is a $3,500 option on the Tesla (with adjustable suspension, which the Tesla has standard). A comparable BMW 5-Series would be the 535i, which starts at $53,400. Finally, the Mercedes-Benz E350 starts at $51,900. Take a basic (which does not include the tech package and only the 60kWh battery) Model S and it starts at $62,400. Take the $7500 federal tax credit off the top and the base Model S is right in line with the base from each German maker.

However, when compared to a S-Class Mercedes-Benz (which Tesla compares the vehicle to in terms of financial deals) a fully-loaded Model S is $104,770. A S-Class with similar features and performance would be $110,325. But the Merc is a bigger car, with more interior space.

The real interesting fact is that in the first three months of the year, Tesla sold 4,750 Model S Vehicles. Mercedes-Benz in the third month alone sold 26,175 in just that month. One could argue that the Model S competes in both markets, but claiming that the Germans are “doomed” might be a bit premature.

Despite the comparison, the takeaway from this report is that Tesla is doing very well and should be applauded as such.