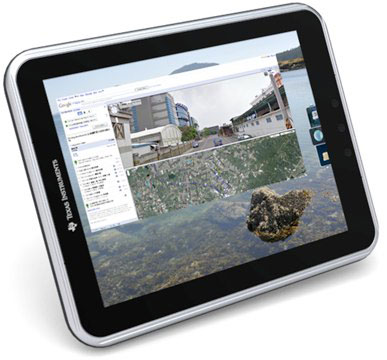 According to Slashgear, Texas Instrument will be debuting its Tablet/Slate entry this August, running on TI’s OMAP4. Texas Instruments OMAP has previously come to light as OMAP Blaze and from what I’m reading sounds pretty interesting. Slashgear is linking to SVTronics, where you can sign up to be notified when more info is available, but Slashgear has quite a rundown on their previous reporting on Blaze. I’m not up to speed but plan on spending some time checking out their links. From early scans, you might want to as well.

The 10.4 inch Tablet will have a 1024×768 touchscreen. It will have 1GB of lpDDR2, and 32GB eMMC. Slashgear is reporting that the Slate is designed for developers not the mainstream. The rest of the feature list is quite lengthy.