Like rival mobile chip-maker Qualcomm, which had stated that its dual-core Snapdragon S4 chips will out-perform quad-core offerings from rivals, it looks like Texas Instruments may be echoing the same sentiments with a dual-core OMAP5 ARM-based chipset that may be just as powerful as commercially available quad-core CPUs today. Though TI didn’t mention competitor NVIDIA in its remarks, the company is definitely gunning after NVIDIA’s Tegra 3 chipset, which will be the star of several new smartphones anticipated to be launched later this month in Barcelona at Mobile World Congress.

For its dual-core OMAP5 architecture, Texas Instruments is utilizing ARM’s newer Cortex A15 CPUs rather than the older Cortex A9 chips. This allows the OMAP5 chipset to be clocked at a lower 800 MHz clock speed, and only with two cores, that will out-perform rivals such as NVIDIA’s Tegra 3, which has 4 cores and are clocked at 1.3-1.5 GHz each. In TI’s presentation, the mobile chip-maker shows that its OMAP5 is faster at browsing the web, playing an MP3 and downloading movies. It’s unclear how overall performance will stack up and how the chip will score in benchmark numbers. It’s still unclear when TI will begin shipping its OMAP5 chips to device-makers. 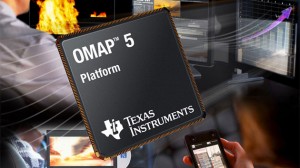 Qualcomm’s new Snapdragon S4 chipset with an improved dual-core architecture and improved graphics offered great performance when compared to the crop of dual-core CPUs available today on commercially shipping phones, however early benchmarks did not compare the S4 to a quad-core Tegra 3.

Rival Samsung is also working on a quad-core Exynos processor and has begun to ship new, improved dual-core Exynos CPUs.

Rival chip-maker Intel will also be heating up the race with its At0m-based single-core Medfield CPU, which offered promising results against dual-core ARM chipsets in early testing.