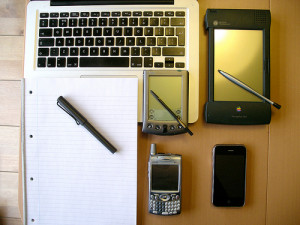 Thinker and obvious gadget enthusiast Phil Gyford decided to pit four of the handheld devices he’s collected over the years against one another in a test of their text input capabilities. As his controls, he also tested his time on his Macbook keyboard and plain old pen and paper, all with a 221 word passage he’d memorized.

The handhelds he tested were the Apple Newton MessagePad (1997), Palm Vx (1999), Palm Treo 650 (2004), and iPhone 3G (2009). Both the Newton and Palm Vx used handwritten input, while the other two used their built-in keyboard and virtual keyboard, respectively. His results, while obviously specific to him and his personal skills, were somewhat surprising.

No shock here: the handwritten methods filled out the bottom half of his test. Interestingly, the Newton and Palm Vx took considerably longer than pen on paper, demonstrating the road block that is handwriting recognition.

While some might take that as a mark against pen input in computing, it’s worth noting that his straight handwriting came in very close behind his keyboarding. I think Phil would be an ideal candidate for taking notes in ink on a Tablet PC without text conversion. Remember, the handwriting recognition engine in Windows XP/Vista/7 can search ink, so handwritten digital notes are more useful than paper even when you don’t convert to text.

Typing on a full keyboard was the winner by a clear margin, even though Phil admits to not being an accomplished touch typist. His iPhone use slightly edged his Treo use (two thumbs on his Treo, presumably the same on his iPhone), but both were close and within a minute of his pen and paper use. I might have to run a similar test and see how I do.