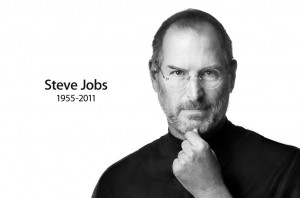 One of those times that you’ll remember who you were with happened tonight when word came down that Steve Jobs had died. I was with the folks at Wayside Theatre in the middle of a technical rehearsal when our music director and sound designer, Steve Przybylski told us that Steve had passed. Intriguingly, Steve P. is the guy who got me interested in Steve J.’s products in the first place. Tonight reminded me very much of the night John Lennon died. I had just concluded an acting class and we had headed to the local pub for a drink when we picked up the news on the TV. Tonight, some of us grabbed our iPhones or other smartphones and checked what was going on. I remember all of those folks from those now seemingly ancient days ago when we got our news from TV and still associate them with that sad news. I’ll remember the folks in rehearsal tonight and associate them with this sad news, and the way Steve Jobs in many ways is responsible for us being able to read about his death almost instantly.

Reams will be written about the impact that Steve Jobs had on us all. Every word is probably worth reading and hanging on to in some respect because we don’t see a Steve Jobs come along all that often. In my 55 years there have been many that I’ve admired along the way. But only a small number belong to a small category that are what I consider one of a kind. Some of those few, like Steve Jobs and John Lennon passed far too early. Some like Michael Jordan are still with us but their genius and accomplishments have long sense become just cherished memories. The fact that I’m blogging this on a device that Steve Job was responsible for speaks volumes about how his legacy has impacted me, and I’m not alone by a long shot tonight.

Steve Jobs gave us all a chance to touch a part of his genius when we work and play with his machines. Thanks for doing that, Steve, in such an insanely great way.

I’ll leave the rest to another genius, William Shakespeare:

Not a whit, we defy augury. There is special providence in
the fall of a sparrow. If it be now, ’tis not to come; if it be not to
come, it will be now; if it be not now, yet it will come—the
readiness is all. Since no man, of aught he leaves, knows what is’t
to leave betimes, let be.