Several weeks ago I conducted an experiment.  I wanted to see if it was possible to buy a used 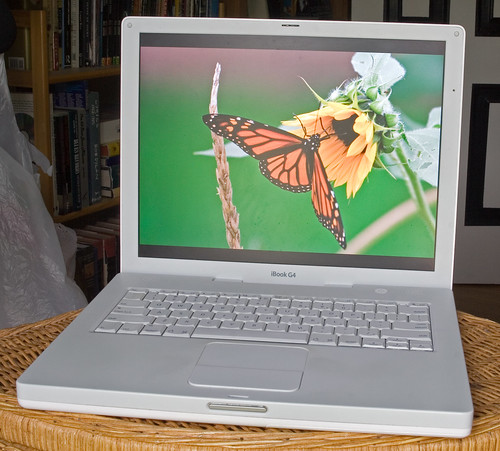 notebook computer that was comparable or better than the current netbooks on the market.  It is possible to buy a netbook, an ultraportable laptop computer that is designed primarily for light functions and web browsing, for $399 or less.  With only $299, my hypothesis was that I could buy a better or comparable notebook.  I decided to use eBay as my testing ground.

The first computer I was able to snag was an older iBook with a G4 800 mhz processor, 640 mb ram, and a 30gb hard drive for around $260.  I was drawn to the iBook as a portable device because of its cheaper price, internal DVD/CDRW, long battery life, Wi-Fi, and OS X.  Although it was the older G4 processor, the iBook was known for being a durable computer with great mobility.  Weighing in at 4.9 pounds, it was a little on the heavy side as most netbooks weigh less than 3 lbs. 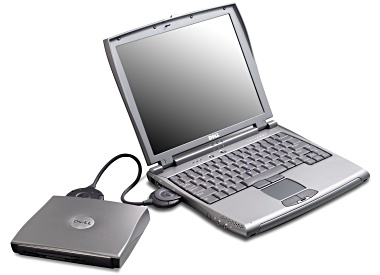 The second computer that I purchased was an older Dell C400 notebook.  The C400 was introduced in 2001 by Dell, and provided a lot for the price.  I’ve found many auctions on eBay for similar units as it appears many of these are being sold as companies update their machines.  The C400 I purchased came with a Pentium III Mobile Processor clocking in at 1.2ghz, 512 mb ram, 20gb hard drive, Wi-Fi, and Windows 2000.  The C400 is a very slim notebook with a full keyboard and nice, bright screen.

The overall performance between the machines I purchased on eBay and current netbooks wouldn’t be noticeable to most users.  Netbooks are not marketed as high-performance computers, rather they are marketed to people who need a ultraportable machine that can perform ordinary tasks.  The iBook’s G4 processor was a little sluggish when running heavy applications, while the C400 crunched numbers smoothly.  Both computers provided similar usability experience.

The machines I purchased from eBay were used.  I read the item descriptions closely and magnified pictures to see their condition.  Both items were being sold as fully functional computers with “some” signs of cosmetic wear.  Little did I know that the Dell C400 would arrive with two hairline cracks in the palm-rest, letters worn off on the keyboard, and scratches deep as the Grand Canyon.  The iBook also showed signs of wear, but it clearly had an easier previous life.  Aside from a few scuffs on the outer case, the iBook had a few engraved numbers on the bottom of its case.  I was very disappointed in the condition of the C400 and decided to return it.  It was completely worn out and advertised to be in a much better condition.

Battery life was a major consideration with the computers I had purchased on eBay.  When buying a used computer, it is important to remember that batteries deteriorate with time and numerous charges.  The C400 I purchased would barely hold a charge.  Being mobile with the C400 meant carrying the power adapter with me every place I went.  The iBook was sold with a new battery because of Apple’s battery recall program, so I lucked out.  Always make sure to inquire about the condition of the battery as many used computers will need a replacement.

Be cautious of what you buy on eBay.  Many of the computers sold on eBay originally had hard and abused lives as workhorses for a company.  When a corporation decides to update their computers, the old often find their way to eBay en masse.  Although I was able to buy a notebook for for a little less than the current netbooks, they were in a worse condition, had no warranties, and offered generally less performance.  My recommendation if you’re looking for a well built yet cheap notebook is to do a little research and select the netbook that is right for you.  A used computer with scratches, worn keys, and a dead battery can’t compare to a fresh, out of the box unit.