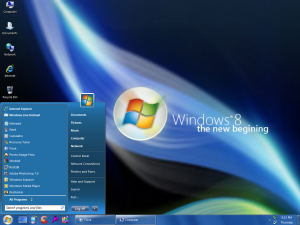 Microsoft has released its Developer preview of Windows 8 and lots of hype about what’s to come.

OK, that’s fine. That’s the way Microsoft has to play the game given how unprepared it was to deal with the Tablet craze.  And we all know what that game is. Microsoft wants developers, developers, developers to line up behind its new OS and have Apps ready to go at the release. However that familiar pattern may be bumping up against a very changed market reality that has already contributed to less than enthusiastic responses for other-than-iPad-Tablets and the operating systems that power them.

How many times have we seen the oft-repeated refrain “where are the Apps?” when it comes to Tablets on both Android and webOS? In both of those cases, I believe the assumption was that “if we build it they will come.” Apple played that card with both the iPhone and the iPad, but then Apple was plowing through virgin ground and establishing a big head start. That head start basically ruled out that strategy for any one who followed. Too bad no one figured that out ahead of time.

So, now Microsoft is relying on its historic game plan, hoping that looking back will also be looking ahead. Microsoft may be correct in the long run. But by giving developers a year of lead time to have Apps ready for Windows 8 on Tablets (and other devices) Microsoft has raised the stakes and the expectations. Bottom line, compelling Apps that take advantage of the platform must be available when Windows 8 launches. One peep of “where are the Apps?” and it may not be game over, but it will be game suspended because of rain delay.

What kind of Apps need to be there at launch? Well, let’s set aside some classes of the basics. The social Apps will be there (Twitter, Facebook, etc…). Theoretically the computing essentials like email, calendar, etc.. will be there (although they aren’t there yet in the developer build.) Office has to be ready to go. (more on that in a bit.) I’m guessing there will be a Kindle and a Nook App ready to go. Beyond those categories of the basics, Microsoft will need to have its App Store shelves stocked with Apps that offer some of the functionality and fun that we see on the iPad, and increasingly on the Android Tablets. Yeah, that means games on one level and they will be tied to Xbox. But it also means Apps similar to Flipboard, Zite, the Apps from Ocarina, etc… There will need to be Apps that appeal to families with kids. And of course there will need to be Apps that take advantage of the pen and ink capability built into Windows 8. Microsoft certainly has the opportunity to recruit the kind of development it needs for this strategy to be successful. Capitalizing on that opportunity is going to be key.

It is important to note that while Microsoft has adopted a strategy that Windows 8 will work on all sorts of devices (except phones), much of the focus so far at the BUILD conference roll out is on Tablets. That is obviously telling and also risky. While Microsoft and its developers have a year to plan, develop and execute, so does everybody else. What’s hot today may old news when the leaves begin to turn in 2012 and don’t think Apple, Google, and Android Tablet makers are going to be sitting still. So, the work has to focus on what will be great tomorrow and not today.

Now about Office. Microsoft needs to have a Tablet ready version of Office ready to go at the Windows 8 launch. I’m not talking about what we’ve seen before. Where Tablet bits got grafted into Office but weren’t fully integrated they way anyone with any powers of observation saw they could be. Beyond that, Microsoft needs to finally quit hiding OneNote and make it front and center of its campaign. In fact, OneNote should come installed and ready to go (no trial versions) on any Tablet that Microsoft licenses for Windows 8. In my view, if this doesn’t occur, Microsoft will not only miss a tremendous opportunity, it will prove to all of its naysayers that they really don’t get it when it comes to exploiting the advantages it actually has.

As you read about Windows 8 (there will be lots written and lots already has been) in the coming months keep in mind that today’s context of what works and what doesn’t is going to shift before Windows 8 gets into consumers hands. Sure, you can pick up the Developer Build today and start playing around. But, contrary to a host of early opinions that say Windows 8 is wonderful and some that say it isn’t, we won’t have any real idea until, well, about this time next year.