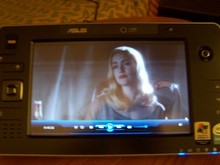 I’ve been looking forward to this day for awhile and not just because it was a travel day to Vegas for CES. I knew I had a 3 hour and 40 minute or so flight so I wanted to put the Asus R2H UMPC through some paces as a media device. If you recall this was one of the principal reasons I got the device.

I had mentioned in an earlier post that I had ripped some DVDs for viewing on my trip. After climbing to 30,000 feet or so on the flight I pulled out the Asus R2H, with a full battery charge, and opened up one of the movies to watch (All The Kings Men). I’m using the larger 4 cell battery that came with my Asus and with WiFi and Bluetooth turned off, I got a report of 3:52 mintues of battery time availalble when the movie started. It got through the 2 hour and 21 minute film just fine as well leaving another good hour of music listening after I was done. I was a bit concerned when I booted up given how much bright sunlight was coming through the windows, but I had zero problem viewing what was in essence a very darkly filmed movie.

I rarely fly longer trips than this, so I’m quite pleased that the Asus R2H can fulfill this aspect of being a companion device. Had battery life become an issue I was ready with the Battery Geek Portable Power Station to add some juice, but it was not necessary at all.