The Best Time To Sell Your iPhone 4 For the iPhone 5 is...

When is the best time to sell my old iPhone? That’s a question I hear almost every day as the iPhone 5 launch looms. With a number of iPhone 3Gs and iPhone 4 owners looking for the best price, we spoke to NextWorth to find out when you should sell your iPhone.

As it turns out, the best time to trade in your old iPhone for an iPhone 5 is difficult for most users to take advantage of. According to past sales data, the high price of the iPhone 4 is expected to be two to three weeks before the iPhone 5 is announced.

While there are constant rumors about the launch date of the iPhone 5, the latest being October 7th, there are relatively few people who know when the iPhone 5 will be announced. Most gadget buyers, like NextWorth will try to keep prices steady in the face of rumors, but consumers taking action based on rumors is what eventually drives down prices. 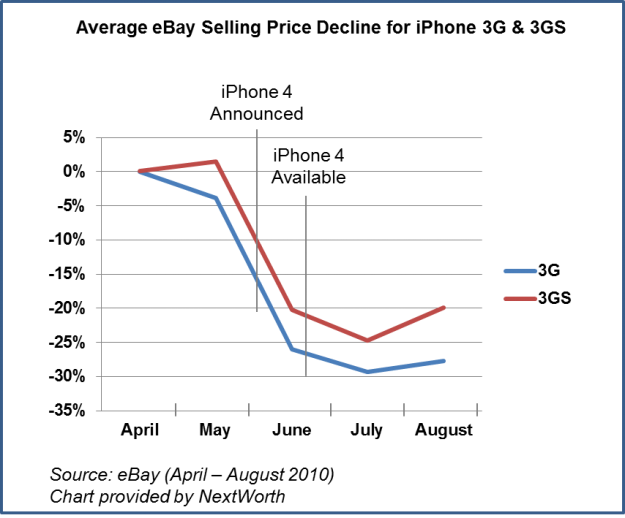 The iPhone 4 caused a dip in iPhone prices before release. Expect a similar trend with the iPhone 5.

Jeff Trachsel, Chief Marketing Officer at NextWorth tells GottaBeMobile that, the earlier you can sell the better, but the, “tricky part”, is selling, “2 to 3 weeks before the announcement.”

While NextWorth keeps prices steady for as long as they can, individual sellers will start to jump on rumors as truth and begin selling their iPhone 4 and iPhone 3GS on eBay and to resellers. Trachsel explains that this floods the market, which drives the price of the previous iPhone down by 10 to 20% by the time the iPhone announcement is made. Once the glut of old iPhones drys up, the price typically rebounds by about 5%, but no where near the old prices.

This is a tricky time to sell, because even with the grace period available from NextWorth and Gazelle, you may have to go without your iPhone for a week or two if you sell early. For some users this isn’t even an option, and for Verizon iPhone owners it’s a tough sell since switching to a basic phone could cost you your unlimited data when you come back to the iPhone 5.

If you believe the rumors that the iPhone 5 will launch on October 7th, with pre-orders starting on September 30th then the best time to sell is in early September. The closer you get to a rumored iPhone 5 announcement, more old iPhones will show up on eBay causing prices to drop.