Designer Jon Patterson’s Pogo headphone concept is the biggest thing to happen to that 3.5 mm audio jack on your smartphone and headphones in well over 50 years, but unfortunately for Patterson his innovation has been prematurely killed due to concerns over patent litigation. Dubbed the Pogo, the headphone innovation isn’t meant to radically change or alter the simple 3.5 mm standard of headphone connectors, but make headphones more usable in daily wear.

Pogo itself is an adaptor with two pieces. One piece plugs into the headphone jack on your device. The other piece you’ll plug into the plug on the headphone itself. The two parts connect to each other via a magnetic connector, similar to Apple’s MagSafe power connection on the company’s line of notebooks. This way, if there is a stress to the headphone wire, the headphone can separate easily from the device and not damage either the device, the cabling, or the headphones themselves.

The simplicity of the system is brilliant as it will work with existing headphones and the laptops, smartphones, music players, and other accessories that support them. As Patterson found out, making any subtle change to the plug would result in costly expenses to productions and would hamper interoperability with existing products.

For consumers, the idea is elegant. If you’ve walked by a table with a smartphone in your pocket and wires dangling out, your headphone wire can get caught on a table corner and get ripped out or can physically pull you back. Not so if you have Pogo, where the magnets would separate if there’s a little force and you’re safe. How about plugging in those earbuds at a coffee shop? If you get up and forget that your headphones are still attached to your laptop, either the headphones will be yanked from your head as you’re walking away to get a latte or your laptop may come with you flying onto the floor. 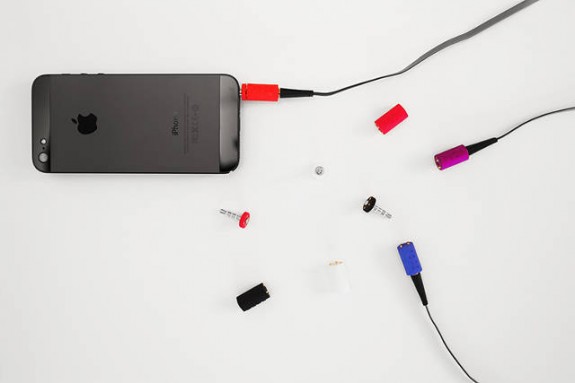 It sounds like a simple, utilitarian, and useful idea. And one that can be as inexpensive as $3 per adaptor kit for Pogo, but the idea is now shelved because of concerns over patent issues. Patterson says he doesn’t have the money to defend the idea against litigation if issues arise and the idea was sent to Belkin; Belkin did its research and did not approve the project. And according to Fast Company Design, Apple’s MagSafe patent isn’t the problem at all. The issue is with two other separate patents.

For now, the entanglements of headphones can be avoided with Bluetooth cans, but those may not offer enough audio fidelity to audiophiles as wired headphones do. It’s unclear what the fate of Pogo will be, but patent litigation is nothing new in the smartphone business. While the patent system is designed to protect inventors, it could sometimes stifle innovation if abused, as we’re seeing could be a potential issue for Pogo.