Tablet-centric publication ‘The Daily,’ operated by News Corporation, is now laying off as many as one-third of its workers. According to All Things D, which is also owned by News Corporation, editorial and sports departments are taking the biggest hits along with the design and production department. That translates to as many as fifty people being laid off as the publication gets restructured.

Initially launched on the iPad, The Daily was an experiment for both News Corporation and Apple to bring new content to the consumer-centric slate. The effort of The Daily is to provide professional journalism that’s specially targeted at the tablet medium. The publication later evolved to launch on Android and helped Apple to bring additional periodicals to the iPad through in-app purchases and subscriptions. 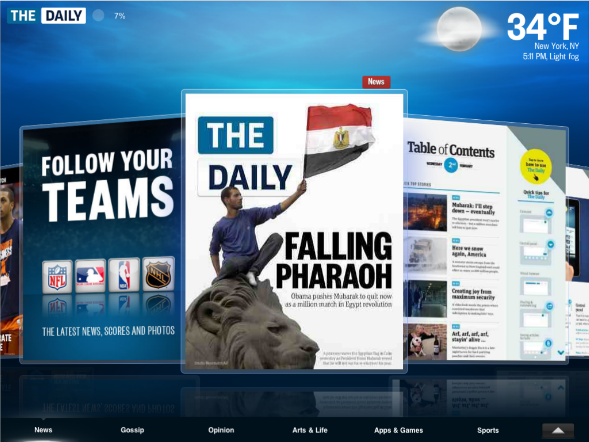 The publication claims to have over 100,000 subscribers of its apps, though it is speculated that the numbers do not match News Corporation’s expectations and that the entire publication may be cut.

The Daily began as an experiment for News Corporation to tackle the digital market by shifting some of its focus on the emerging tablet market in an era where newspapers are finding it hard to stay in business through normal business models.

News Corp. officials have publicly defended The Daily, which News Corp. CEO Rupert Murdoch thought would serve as a template for newspapers’ transition to the tablet era. Murdoch’s team worked closely with Apple and its late CEO Steve Jobs to produce a publication initially tailored for the iPad.

However, since the publication launched, Apple had accommodated rival magazines and newspapers from the print sector and made those publications more comfortable to view on a tablet, eroding any advantages that The Daily had initially promised.

Other cost-savings measures include eliminating a horizontal page layout and having just a vertical layout moving forward for the tablet-centric publication.