At the end of its E3 press conference Ubisoft debuted one of the biggest surprises of the conference: an MMORPG in the Tom Clancy universe called The Division.

In Tom Clancy’s The Division a pandemic has hit New York City following Black Friday, grinding the city to a halt. The streets are empty, stores unoccupied and the power is out in most of the city thanks to the crippling virus. Players play an elite Division agent as they try to restore order to the city along with their friends.

The first gameplay demo of the game shows a group of three friends in the DUMBO area of Brooklyn responding to an alert from a police station. The players make their way to the station to take on the thugs who took over the station and locked up the police.

During the ensuing firefight another friend joins from their iPad, or other tablet, to help the fight. The tablet player controls a drone that’s able to provide some air support and mark enemies on the battlefield. In the example show the drone highlights an enemy that’s hiding behind a billboard so the players on the ground know his exact movements.

After freeing the police officers the players get access to the station’s armory, which holds some new guns for them to take. After leaving the station they encounter another group of agents in what’s called a Dark Zone. Dark Zones are where player vs player and some player vs environment events will happen, giving the game more of an MMORPG feeling. 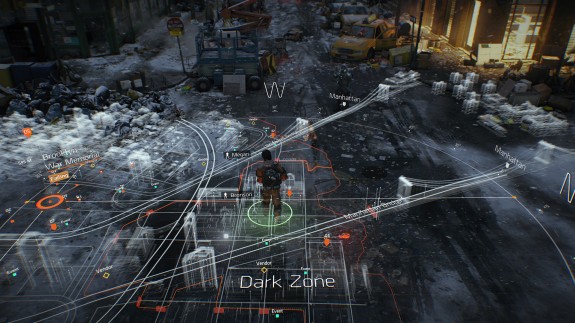 While the gameplay looks incredibly fun, one of the most interesting ideas the developer (Massive Games) will implement in the game is all about player matching. When they first play The Division players can tell the game what kind of gamer they are and the game will match them to other players in similar situations. For example, the game can group together gamers with small children so their group partners will understand when they have to step away for a few minutes to tend to a crying baby.

The Division will come out for next-generation consoles (presumably both the PlayStation 4 and Xbox One) sometime in 2014.