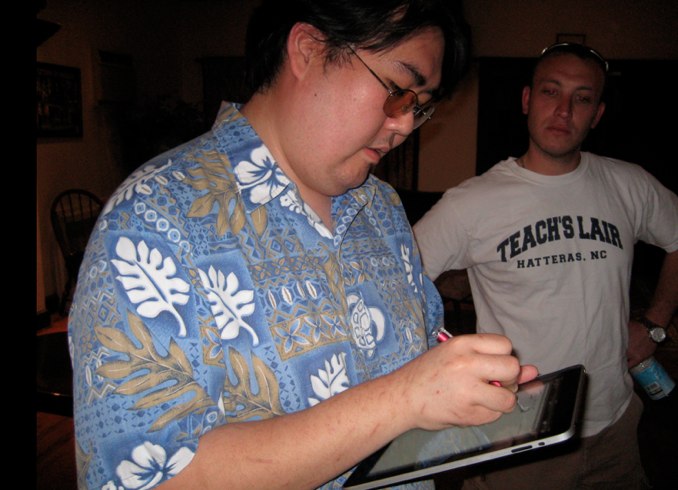 Obviously from the get go, the Apple iPad should in no way be confused with what many of us here on the pages of GBM think of as a Tablet PC. It is a different kind of device and intended to be so. If you are not clear on that, you haven’t been paying attention. Steve Jobs is pretty emphatic about the use of a stylus being a big no-no, but then he also has been emphatic in the past about users not wanting to see video or read books on small screens. We all know how that turned out.

If there is anything the iPad resembles it is the UMPC or perhaps some of the MIDs we never saw come to market. But I think those kind of comparisons are actually a bit silly given how technology has evolved to a point where the iPad is actually possible. We’re not just talking apples to oranges, we’re talking apples to artichokes. All of that said, this second part of my review/coverage of the iPad is going to look at the device from a Tablet PC perspective and how my experiences with that platform affect my reactions to the iPad today. Let’s get started.

So, if I told you I had a device that I could tote around with me, access the Internet anywhere I could find a WiFi signal, view media, play music via iTunes, allowed me to create documents, read eBooks and magazines you might think I was referring to the iPad. Actually I’m referring to the Toshiba Portege 3505 that was my first Tablet PC, as well as the Toshiba Portege M200, and the many other Tablet PCs I have used and reviewed since then.

Now flash forward a few years and add a touch screen to that, and I might be talking about an Asus, TabletKiosk, Samsung UMPC, or any number of current market Tablet PCs that offer touch screens. What the majority of these devices had that the iPad doesn’t is digital Inking in some form or fashion. They all used the Tablet PC bits supplied by the various Windows operating systems that they employed. Success with Inking depended (and still does) on the digitizer.

Technology has advanced to such an extent that what we saw back in the early days seems almost archaic currently. Let’s take a quick look at some of the legendary complaints about the Tablet PC form factor from those early days.

With the exception of that last item, I would argue that Apple has managed to deliver, or come close to delivering, the remainder of the list with the iPad. But there is that little thing about Inking.

I first bought a Tablet PC for one reason and one reason alone. I wanted a better way to take notes in rehearsal for the plays I directed. I had used legal pads for years and have boxes of them stored away. I joked that it was the most expensive legal pad I had ever purchased tipping the register at over $2000. But I got more than a digital legal pad, I got a full laptop in the bargain. Once I started taking notes in Microsoft Journal, and later OneNote I would never look back to notes on paper again. I still won’t. With improved search capabilities notes in Ink became like any other bit or byte on the device. It could be searched and found, and this was a key. This meant you didn’t have to write correctly, or beautifully, or to any standard. All you had to do was scrawl away. And believe me, I did and do scrawl. There are chickens out there who are embarrassed by my chicken scratch because it gives their scratching a bad name. But I was always able to find what I needed when I needed it. In my opinion, too many got caught up with handwriting recognition, which at its best worked OK, and that was the beginning of the death of Inking. But, I’ve covered all of that before and written (and Inked) more words about it than you can imagine. I find it somewhat humorous to read blog posts and tweets today from some of those who poo-pooed Tablet PCs because it was too difficult to Ink on, but they are enjoying trying to learn how to use the virtual keyboard on the iPad and bragging about their success with their below 60 WPM typing skills.

The bottom line with the first iPad is that Inking, the way I use a Tablet PC for note taking, is not possible. The capacitive screen forces you to hold your hand above the device as their is no palm rejection. The OS at its core isn’t equipped to do this correctly. When I am taking notes in rehearsal I don’t have time to think about how I’m using the stylus, I just Ink. That said, we’ve seen capacitive digitizers work well for those who do drawing and artwork in the past, and already we’re seeing apps available that allow that to happen on the iPad. But when it comes to digital note taking, the iPad is not the device for my arsenal, and I can’t imagine it will be for anyone else who uses a Tablet PC in that way, even with a sausage or pencil wrapped in a sock. There are those, like Sumocat and his acolytes, who might discover with patience that they can be reasonably successful with some third party apps, but Tableteers know that Inking starts in the OS and ends with the digitizer. I’m anxious to see what the Evernote folks crank out, as they say Inking on the iPad may be a part of a future release. A recent post by Brett has generated a lot of comments on this, and while he’s accurate as far as he goes, Brett leaves out the fact that the OS has to be ready to receive and act on the signals from the digitizer before any Inking can take place.

I’m not surprised by exclusion of Inking on the iPad, nor should anyone be. Microsoft long ago relegated Digital Ink to a second class citizen in its vision so there was and is no pressure for Apple to think about including it at this point.

The other big thing that Tablet PCs offered was mobility. Yes, it can be argued that you could carry a notebook/laptop with you, but Tablet PCs, whether they were a slate or a convertible, or even a hybrid, gave you the ability to work just about anywhere without having that hinged shield in front you. You could curl up on a sofa with a Tablet PC and read through a magazine or eBook, watch video, or surf the web. UMPCs promised to give us all of that and more in a smaller form factor that made touch a part of the mix. Unfortunately, UMPCs died on the vine for many reasons that have been well chronicled before. The iPad gives you this mobility portability in a form factor that eliminates many of those early concerns about the Tablet PC form factor. It ups the ante with its screen size. And, equally as important as the hardware and software, it comes from a maker that has the muscle, the know how, and the guts to try and create a market for the device, even though many still question what they will use it for.

I know many Tableteers have their eyes set down the road on the HP Slate, the Notion Ink Adam, the Microsoft Courier, and possibly other Tablets as well. Everyone hopes that a good Inking solution can be found. This recent video showing pen and touch working together got a few hearts to beating faster, but I think we’ve got a ways to travel before that ever finds its way into a product.

So, from a Tablet PC perspective, I think the iPad is a big story in the ongoing evolution of computing towards a more natural human interface. I don’t think by any stretch of the imagination it is the story to end all stories and I”m anxious to see how it impacts future development. But I’ll close this section of this multi-part look at the iPad by saying this. We might see many slates or tablets or media devices or eBook readers come down the road. But at some point, there is going to be one of those devices that lets a user pick it up, grab a stylus and ink out a quick note, or sign a document, or mark up a PDF on top of all of the features we’re beginning to see today. For those who acknowledge that Inking is important to a great many who want to use these mobile devices, that will be an important day. For that manufacturer, they will have deliver a differentiator that could lead to a big success.

Just remember, Steve Jobs says that using a stylus is a sign of failure in Tablet design. But this is from the guy who is quoted as asking what a Tablet was good for besides surfing the web on a toilet. But we’ll save that for the next post in this series.