Microsoft created a mildly amusing parody video making fun of the Google Gmail system of looking at the content of your email and producing targeted ads based on the content. While the video is kind of funny, it highlights a variation in the approaches Google takes versus Microsoft.

Being an advertising company, Google produces products designed to get as many eyeballs on their ads as possible. Microsoft sells software and advertising is a sideline item. An Office 365 subscription is the Microsoft competitor to Google’s Google Apps and costs a minimum of $6/month for small businesses. A limited free version costs nothing for Windows Live users.

The Gmail Man video was designed to inspire their employees responsible for promoting the Office 365 product. According to ZDNet the video was leaked by one attendee at the Microsoft Global Exchange conference where the video was shown. When asked if the video was legitimate, Microsoft’s official response was “no comment.”

Gmail man strikes a nerve even with those of us who like Gmail. The ads shown often fail to match the content. In the video Gmail mentions itching and burning to a lady user and offers up an ad for some ointment. She replies that the keywords had nothing to with a bodily problem. Often the ads I saw early on with Gmail had nothing to do with the content of my messages. However, I have also gotten very good at ignoring every one of the ads so the matching may be better now at matching content with ads, but I wouldn’t know.

Here is the video:

If having a computer scan your email to serve up ads related to keywords it finds in the message bothers you, do not use Gmail. If, like many of us, you don’t care; Gmail is an excellent source of free email for you individually or your small business. You save the expense of setting up a Microsoft Exchange server or paying Microsoft for the use of their Office 365 service. 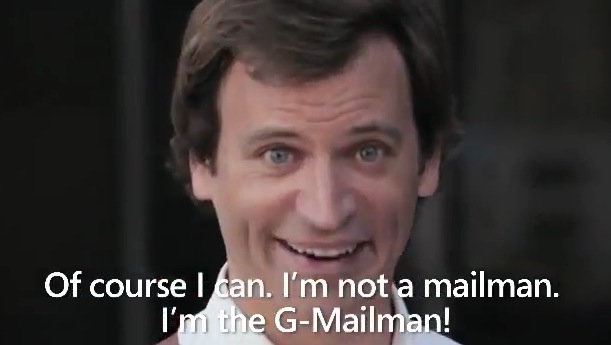 The ads Google serves up come from matching the content of your messages with the keywords advertisers buy. That is their business and as a long time Gmail user I don’t have a problem with it. For an alternative view, read Paul Thurrot’s piece in which he calls the ad “the single greatest Microsoft ad ever made” and explains that it is not really an ad but an internal video meant for the company’s employees and not public consumption. Microsoft should know that in the Internet age of Wikileaks, they to know it would eventually get out.