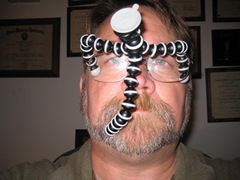 No, I’m not being attacked by an alien in this picture, but that’s the GorillaPod Go-Go from Joby wrapped around my glasses.

It took awhile for Joby to finally get the GorillaPod Go-Go to market but it did finally make it. Was it worth waiting for? I think so. Joby’s GorillaPods are flexible tripods that, until the Go-Go, mostly were used for cameras. Now with the Go-Go, you can prop up not only a camera, but also a MP3 or other mobile media players, or any small device that you need to have stand alone instead of holding it in your hands.

The GorillaPod Go-Go comes with four attachments: A shoe that has the typical universal adapter screw to attach a camera, a shoe with a suction cup, and two shoes that have high-bond adhesive plates. Each shoe can be inserted into the top of the device, and is removable.

The flexible legs allow you to bend and mold the tripod to any shape and this can come in handy in any number of situations including propping it up on a desk, attaching it in your car, or setting it on a tray table on an airplane. You can wrap the legs or just bend them to stand.

The suction cup shoe is obviously the most flexible as it allows you to connect the device of your choosing when you need to. Although I wouldn’t think of hooking anything with any real weight to it.

I’m glad I added this to my gadget back, primarily for media playback on either the iPod Touch or the iPhone. The cost of the GorillaPod Go-Go is $29.95.