The History of Tablet PCs... featuring one Tablet PC 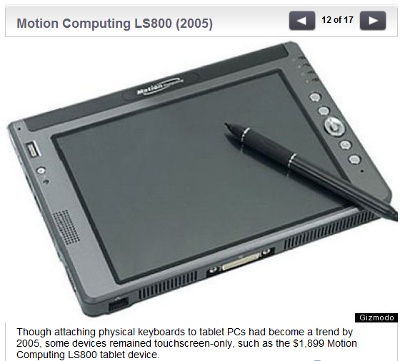 Ugh. I don’t know why I bother looking at anything in the mainstream media that mentions Tablet PCs. Oh right, I run all those feeds through my reader and filter anything with the term. Too bad I can’t filter out the items that do no justice to the term.

The Huffington Post put together a pictorial timeline of 17 tablets, suckering me in with the headline “History of Tablet PCs”. In fairness, the timeline goes back pretty far, well before Microsoft’s claim to the name, and stretches into the future a bit. Still, is it too much to ask for more than one actual Tablet PC in a “History of Tablet PCs”?

There it is: the Motion Computing LS800, representing Tablet PCs for 2005. They do also list the Compaq prototype Bill Gates showed off in 2001, as well as the HP Slate representing tablets yet to come. But really, one actual, commercially available Tablet PC in a “History of Tablet PCs”?